The naked retiree and life in the ‘Lucky Country’ 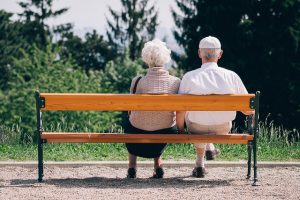 Now that the naked retiree headline has got you in, time to say a quick hello from Stradbroke Island where I am taking a couple of weeks out with family. Today let me introduce you to guest blogger Kathryn Johnston who has a few thoughts to share on how retirees are getting on in the “Lucky Country.” Kathryn wrote this, the first in an occasional series, on New Year’s Day, coinciding with a new pension regime for retirees.

This post titled “the naked retiree” is the beginning of a perspective of what is happening in Australia for older Australians. What does it mean to be a naked retiree? It is not about going to Alexandria Bay Beach on the Sunshine Coast or skinny dipping in a backyard pool. It is about the political landscape in Australia and its impost on older Australians. Politicians are our country’s custodians. They are elected to manage our country, our wealth, our health, our future.

As an older Australian I am interested in how older Australians are faring in this “great” country of Australia. Even while I write these words “great country” I ask, are older Australian’s getting a “fair go”? In 1964 when Donald Horne’s book “The Lucky Country” was released most of the populace understood he used the term ironically. Horne penned the words “Australia is a lucky country, run by second-rate people who share its luck.” Over time, others misinterpreted Horne’s message and have used the term “lucky country” to mean we have the best of everything in Australia. In Australia, today, as we live on borrowed money and older Australian’s live on borrowed time we find we are not so “lucky”.

My question is “why are older Australians subject to ‘unfair’ political decisions made law through the parliament, laws that no politician will ever be subject to?” The decisions have been made and older Australians are the target and method for “getting the budget back on track”. The catch-cry is that without the changes to age pension entitlements commencing today – 1 January 2017, the age pension will no longer be sustainable in the decades ahead. Is there another way?

This matter first came to my attention when I was in Tasmania in October. There was an article in The Mercury newspaper titled “retiree battles to stop pension cuts”. Ron Tiltman, 76 years of West Hobart tells how he will be affected by aged pension cuts. From 2017 he is $14,000 worse off a year. For Mr Tiltman he decided to take his superannuation in cash after his partner and former teacher became ill with cancer. After her death, his entitlements under the current rules were he would receive $33,000 a year of her defined benefit superannuation and a part age pension of $580 a year. At the start of 2016 Mr Tiltman’s pension was cut to $270 and as of today, he will not receive any government pension. The Association of Superannuation Funds of Australia (ASFA) benchmarks the annual budget needed for Australians to live a modest and comfortable lifestyle. These are detailed below:

For Mr Tiltman to live a comfortable standard of living, which is what he planned for, he will need a yearly budget of $43,062. Now, under the government changes to the age pension, he must live a more modest lifestyle. As he said “it was implied that it would only be wealthy people affected – this is just wrong. Many of these people (i.e. those affected by the changes) are on very modest incomes and in fact 68% of those affected have a defined benefit income of less than $35,000.” Further, he said “this has hurt me – I’ve paid my taxes and now you see these politicians walking out of their jobs with huge pensions of their own” [1].

On 17 December, 2016 I read a letter to the editor of the Toowoomba Chronicle from Ray Harch who explained how he and his wife’s pension will be cut by more than $130. In his words “a great Christmas present”. If they had purchased a retirement unit at $500,000 they would have been eligible for a full pension but they chose to keep some money aside for unforeseen events as they aged. He questioned why older Australians should be penalised, those who had saved and planned for a more comfortable retirement. As he said the government “while at the same time wasting billions on other, in many cases, stupid programs”.

Then in the Brisbane Courier Mail it was reported that “half of older Australians fear they are ‘financially unprepared’ for retirement with looming pension changes. More than a quarter of Australians aged 55 and over are worried they will not be able to afford food or household bills, new research has shown.”[2]

One of the most telling stories [3] I have read in recent months is from Bob Parry, a pensioner who has more than 60 years’ experience as an accountant. Mr Parry was so angry about the changes he wrote to the Prime Minister, Mr Malcolm Turnbull. Mr Parry did several calculations and found that a single pensioner who had total assets of $541,295 under the “old” rules would receive a part pension of $9,761 per year but under the “new” rules they would lose their entire part pension. Their fortnightly income would drop from $955 to $579 a fortnight. Similarly, a pensioner couple who own their own home with joint total assets of $814,128 under the “old” rules receive $14,065 per year. Under the “new” rules their fortnightly income would drop from $1480 to $939.

Under the Turnbull government, whatever way you look at it, it is a mean-spirited cut for older Australians. Those who have worked conscientiously over their lifetime and gone without, in so many areas, will no longer have a comfortable retirement.

Due to the cuts and changes, many older Australians will soon be “skint” with savings eroded as they dip into their capital. The changes will make every older Australian spend their savings until ALL older Australians are in the same “paupers” pool relying on the full pension and a less than modest lifestyle. The government changes are successful in one area, that is, in penalising “middle Australia” to improve the life of the less advantaged. This is the life of the “naked retiree” – skinned to the bones! Older Australians who depended on and planned for retirement under the “old” rules – living in the “lucky country”.

You can read more on the “naked retiree” and other reflective topics in Kathryn’s blog, Scattered Straws. https://scatteredstraws.com/

Next week: She Who Also Sometimes Writes will have a pre-election piece for your greater edification. Meanwhile, I’m going for another nap.