Home Friday on My Mind A few myths about refugees

A few myths about refugees 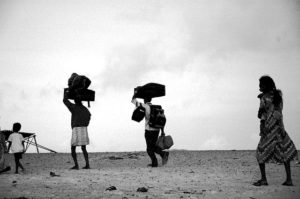 My conscience would be burdened if anyone went to the polls on July 2 believing some of the persistent myths and misunderstandings about asylum seekers and refugees. First, let’s set out a few facts in the interests of perspective:

These facts sit uneasily amidst the seriously heated debate between refugee advocacy groups and supporters of groups like Rise Up Australia, the Australian Liberty Alliance and Pauline Hanson’s One Nation.

Many Australians believe (and resent) the story perpetuated by hoax emails that refugees receive more Social Security payments than permanent residents. You might also hear that refugees are given (free) houses, cars and big screen TVs, the latter one of the first things spotted on A Current Affair’s expose on Nauru. (Gasp. They have microwaves too).

There is also a persistent myth perpetuated by talkback radio jocks and right-wing commentators that our shoreline (all 25,670 kilometres of it), will be over-run if the current border protection policy does not remain in place.

Of the 1,695 people in detention on the mainland, 60% (1,025) arrived in Australia lawfully but were subsequently taken into immigration detention either for over staying or breaching their visa conditions. 548, or fewer than 40%, were ‘Irregular Maritime Arrivals’ (some terminology refers to these as ‘Illegals’).

On face value, Labor’s asylum seeker and refugee policies are not that far removed from those of the LNP.  Both remain committed to offshore processing, regional settlement and stopping people smuggling by turning boats away. However, Labor has a plan to provide $450 million over three years to support the UN’s refugee agency. Labor will abolish temporary protection visas, re-instate access to the Refugee Review Tribunal and abolish the Independent Assessment Authority.  Labor states it will also reinstate a statutory requirement for the Department of Immigration and Border Protection to report on how many claims were processed within 90 days of a completed application being received. This ‘90 day rule’ was removed by the Abbott Government last year.

In September 2015 the Abbott Government responded to the Middle East humanitarian crisis by announcing that Australia would take an additional 12,000 refugees fleeing Syria and Iraq.

In February this year, the Sydney Morning Herald reported on Canada’s exceptional response to Syrian refugees, resettling 20,490 in just three months. Labor called on Immigration Minister Peter Dutton to explain why, as revealed in a Senate Estimates hearing, that Australia had resettled only 26 Syrian refugees since the emergency intake was announced. A spokesman for Mr Dutton said the government was conducting rigorous security and other checks that could not be rushed.

Social Services Minister Christian Porter has since told the ABC (on April 6), that 187 refugees had now been resettled in Australia and an additional 1,600 visas had been issued overseas. Meanwhile, Canada’s intake of refugees from Syria topped 26,000.

The indefatigable Refugee Action Collective is staging one last peak hour vigil next Thursday outside Immigration Minister Peter Dutton’s office on Gympie Road Strathpine. The aim is to bring the Minister to account and remind people of comments made on Sky News when he criticised Labor and Greens’ proposals to lift the intake to 27,000 or 50,000 respectively.

“For many people, they won’t be numerate or literate in their own language let alone English,” he told Sky News.

“These people would be taking Australian jobs, there’s no question about that.”

The Australian Greens is the only political party with a truly reformist answer to the asylum seeker/refugee question. The Greens say it is a better (economic) proposition to allow refugees to live in the community. The Parliamentary Budget Office estimates the average cost of allowing someone to live in the general community at $35,000, compared to $225,000 on Manus Island or Nauru.

The Greens’ plan to close down offshore detention on Manus Island and Nauru and to close ‘the worst’ Australian detention centres on the mainland and on Christmas Island. They would establish 30-day time limits on detention in Australia, with ‘periodic judicial review’ of any detention thereafter.

A few of the minor parties are less forgiving: The Rise Up Party says it would ‘implement legislation that will send all illegal asylum seekers back to where they came from’.

Pauline Hanson’s One Nation has a policy of ‘zero net immigration’. By that is meant, if a migrant goes home, you let another one in. Sustainable Australia also has a ‘low immigration’ policy.

The Australian Liberty Alliance is running candidates in the Upper and Lower houses for the first time on a platform which includes stopping the ‘Islamisation of Australia’. You can read about the ALA here and watch their 15-second advertisement which has been banned from television. *

All you need is love (ra-ta-ta-ta-tah)

Sigh. It’s Refugee Week, did you know? I often wonder how this country lost its multicultural way after we welcomed and resettled 57,700 Vietnamese refugees between 1975 and 1982. Of these, only 2,100 or so were unauthorised arrivals by boat, although many more set out by sea and never made it to shore. The 1971 Census revealed there were just 700 Vietnamese in Australia.

Fifteen years later it was 80,000 and at the 2011 Census, the numbers of Vietnamese-born living in Australia rose to 185,039. Despite language barriers and religious differences (the main religion is Mahayana Buddhism), these new migrants were widely accepted.

The Beatles were strongly opposed to the Vietnam War, or rather, western involvement in it. At the peak of the conflict, John Lennon wrote a famous song, which in Vietnam is known as Tất cả những gì bạn cần có là tình yêu.

*policy points drawn from the websites of political parties