Home COVID-19 How deep is the financial hardship well?

How deep is the financial hardship well? 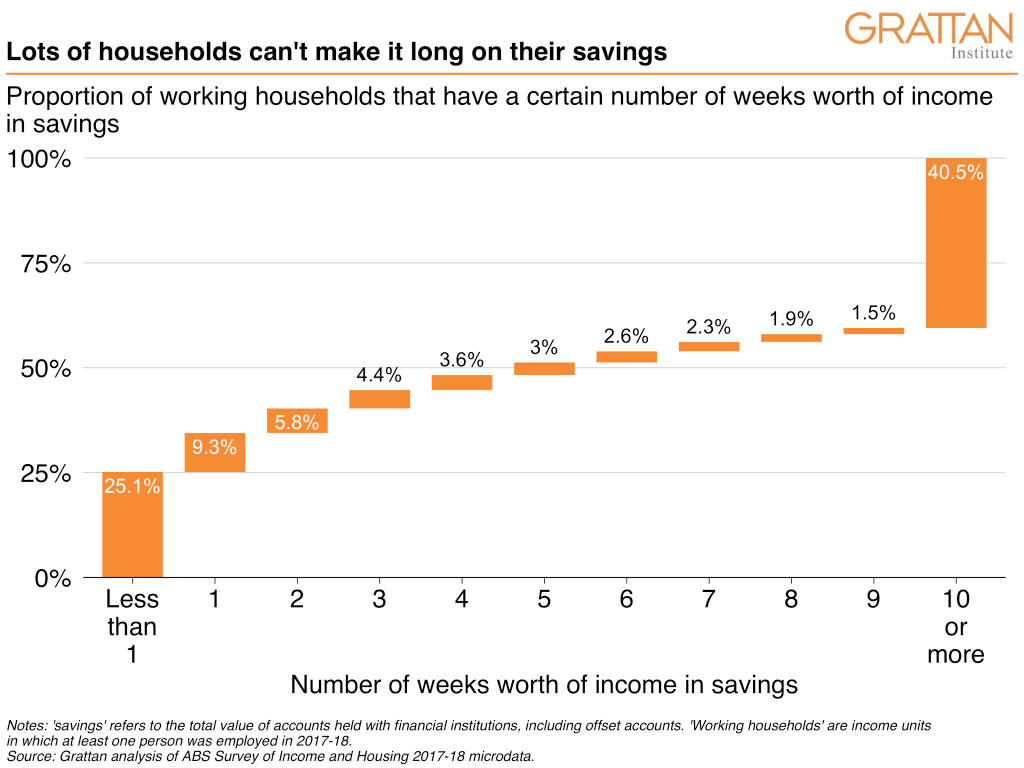 It is probably no comfort to anyone to reflect on the year when investors could get 14.95% on a bank term deposit. It was January 1991, the recession Paul Keating said we had to have. People with personal loans and credit card debt watched horrified as repayment rates went to 20% and beyond. The average variable mortgage rate rose to 17.5% at the same time. The gap between the haves and have-nots in that era was painfully obvious.

In the early 1990s, financial hardship forced many younger Australians, unable to service their mortgage repayments, to walk out of their mortgaged houses, leaving the house keys on the bank’s counter. Meanwhile, the lucky worker/investor with a lazy $100k to invest could earn $14, 950 in interest (the price of a new car), over 12 months with no risk whatsoever. Except, of course, if the deposit was with one of the eight financial institutions that went broke in that era.

In 2020, the COVCID-19 pandemic has certainly made it clear how many Australians are suffering financial hardship. At one end of the scale, you have self-funded retirees, on the pig’s back, really, but struggling with the collapse in the value of shares and difficulties finding safe places to store their cash for a return of more than 1.75%.

At the other end of the generational spectrum, while the official unemployment figure is an improbably low 6.2%, it does not reflect the one million casuals who not only lost their jobs, but did not qualify for the Federal Government’s safety net, Jobkeeper.

COVID-19 struck at a time when the Australian household savings rate had dropped to 3.6% (20% is the ideal), and is forecast to drop to 2% or lower in 2021-22. The rate is calculated as a percentage of the amount saved from disposable income.

Meanwhile household debt – most of it linked to mortgages –  is at a high of 119.60% of GDP. Economist Gerard Minack told the 7.30 Report in November that household debt at 200% of household income was a “massive macro risk”.

Then came COVID-19 and an economic shutdown the likes of which the country has not seen since the 1930s.

I’m running these confronting numbers past you because there is a lot of nonsense written about Poor Pensioners vs Irresponsible Millenials.  Also, some commentators, particularly in the housing sector, are ‘talking it up’ at a time when worst-case scenarios predict a 30% drop in prices.

Conversely, stock market analysts are talking the market down, even as it keeps (slowly) recovering. You have to wonder why.

In mid-April the share market was officially proclaimed a “bull market’’ by the Australian Financial Review (AFR), because share prices had jumped 20% since mid-March.

What’s amazing is that the market has rallied at the same time that Australian superannuation funds paid $9.4 billion in financial hardship paymentsto approximately 1.17 million fund members. Australian super funds have a large exposure to equities, so they have managed the payments so far by selling investments, including shares and holdings in managed funds.

They also asked for help. As the AFR’s exceptionally well-informed Chanticleer observed, The Australian Superannuation Fund Association (ASFA) put a proposal to Treasurer Josh Frydenberg to allow the Australian Taxation Office to cover the hardship withdrawal payments. The plan was super funds would repay the payments over a period of time. The industry also called on the Reserve bank of Australia to provide a liquidity buffer. None of this happened, but Australian funds are expecting a continuation of the rush to withdraw hardship payments.

Under the COVID-19 measures, individuals whose income has been affected can withdraw up to $10,000 of their superannuation balances prior to June 30. They can, if necessary, apply for a further $10,000 after June 30.

There are ordinarily a few hoops to jump through to apply for an early-release hardship payment. As we know, superannuation is meant to be locked away until you retire or reach an age when you can officially tap the fund for money. But in these dire times, super funds worked with the Australian Tax office and other government departments to expedite hardship payments.

By close of business on May 7, ASFA made around 1,175,000 individual payments, totalling around $9.4 billion in temporary financial support. ASFA estimated that 98% of applications were paid within five working days.

Applying for a super hardship payment is a risky business if you are under 35. According to AMP, the average super balance for people aged 25-29 is $23,371 for men and $19,107 for women. In the age group 30-34, the average balance for men is $43,583 and for women $33,748. So it does not take too many trips to the hardship well to run out of cash. I used those age groups deliberately, as most pollsters agree that so-called Millennials are people now aged between 22 and38.

But it is not just the young that have little in the way of savings. According to the Grattan Institute, 50% of working households have less than $7,000 in savings. This probably explains the rush of super fund hardship applications. The Institute admits the data is a few years old, but says the scenario is unlikely to have changed much.

“The meagre savings of many low-income workers are a big worry because they are most likely to be employed as casuals and therefore not have paid sick leave or annual leave.”

The Grattan Institute makes the point that as the lockdown drags on, more people will start to run out of ready cash.

This last figure may bring your head up, if you remember news stories from New York, which we found shocking, of people with less than $400 in the bank.

Sometimes I think about these matters when doing the weekly grocery shopping, where retail prices are clearly outpacing inflation. (Ed: We did score a large pumpkin from a roadside stall for $3, so you can get lucky).

Those with a job who have not had a pay increase in years can justifiably feel cheated. Admittedly, the Federal Government came to the National Cabinet table with an extraordinary rescue package. But while one of these measures temporarily doubled the unemployment payment overnight, it now seems to be flawed piece of legislation.

People may rightly point out that employers are obliged to pass on the Jobkeeper payment of $1,500 a fortnight, regardless of what the employee was being paid previously. At some stage, these payments will stop and we will revert to the status quo. Will recipients who were technically overpaid have to repay some of this money, or does it just go to the deficit?

Robodebt II, coming soon to a cinema near you.