Home Friday on My Mind Homeless people sleeping in their cars

Homeless people sleeping in their cars 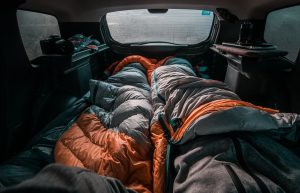 Today’s headline about homeless people could well be an urban myth; that is, a story people tell each other, swearing that it’s true. The housing crisis in Australia – a combination of unaffordable housing and scarce rental properties – is forcing people to live in their cars. I’ve done a bit of fact checking on this, but hang around while I relate this story from Tasmania.

We’d stopped at Scottsdale, a high country town in Tasmania’s north-east. We’d chosen the town’s free camp, which provided toilets and showers (the latter powered by three one-dollar coins). We were settling in for the evening when it became obvious that the older woman next to us was preparing to spend the night alone in her small Japanese car. The overnight forecast was a minimum of 7 degrees. She’d hung towels in the side windows and fixed a screen over the windshield. She seemed to be withdrawn, so we respected her unspoken need for privacy. But as far as I could tell (being next door and all), she went to bed as soon as it got dark. I decided my penance for not engaging in conversation was to make her a coffee in the morning. But when I arose (at 7.30am), she had gone.

It’s not illegal to sleep in your car in Tasmania – I looked it up. In theory if you are homeless, you could free camp your way around Tassie and nobody would hassle you. Some free camps allow you to stay for up to a month. But it does get cold from April to November, and rough campers would have to travel to town to find a public shower.

In Queensland, it’s illegal to sleep in your car unless you are parked in somebody’s driveway (with their permission). In which case you’d probably be inside, on the couch with the dog. There are similarly tough rules in the Northern Territory.

As blogger Tim Beau Bennett discovered, many local governments have specific by-laws vetoing this practice, so it would pay to check.

The biggest problem with assessing the level of homelessness in Australia is that the most reliable data (the Census) only comes out every five years. It could well be Spring before we see the first results of the 2021 Census. We therefore rely on data that is six years out of date (116,471 in 2016). But what’s been going on in the interim?

Recent reports show that up to 44,000 women of all ages are vulnerable to homelessness, with domestic violence being a key risk. Homelessness Australia (the National peak body for homelessness in Australia) released an analysis of housing data from the Australian Institute of Health and Welfare that showed that 1,600 women over 50 sought help from homelessness services in 2016. These women were either ‘couch surfing’ – that is, staying temporarily with friends or family members, or sleeping in their cars. The numbers had increased 75% and 81% respectively between 2012 and 2016.

Homelessness Australia launched a campaign in March this year calling for $7.6 billion to be allocated to long-term housing for women over the next four years.

The research identified a shortfall of 16,810 homes, the building of which would provide economic benefits of $15.3 billion and create 47,000 jobs across the economy.

The 2019-2020 research report Nowhere to Go, prepared by Equity Economics, showed that 9,120 women are becoming homeless every year. Women who had experienced family and domestic violence were the biggest client group seeking assistance. In 2019-20, 119,200 clients, or 41% of all such clients, sought assistance while experiencing domestic and family violence. More than half (55.8%) required accommodation. Alarmingly, the data also revealed that 7,690 women go back to abusive relationships, out of necessity.

It is perhaps illuminating to discover that Homelessness Australia was funded by the Federal Government until December 2014. Since then, it has been staffed by volunteers and has no paid staff.

As we mark the eighth birthday of Friday on My Mind, those of you who have hung in for a long time would know I often write about this topic. Australia has had a steadily increasing homelessness problem since 2011. The elevation of housing from a place to live and grow a family to a wealth-generating asset is the key issue.

The resulting paper shows just how close so many people are to becoming homeless, primarily because of rental increases and ever-tightening rental vacancies.

All it would take is one life crisis –  a relationship breakup, a serious illness or losing work due to economic circumstances, the authors concluded. Many people found out at the peak of the COVID-19 pandemic how circumstances can quickly change.

The survey was commissioned by AHURI from researchers from Swinburne University of Technology, University of Tasmania and Launch Housing. The task was to estimate rates of people at risk of homelessness for small areas (with a population ranging from 3,000 to 25,000).

Those interviewed were considered at-risk of homelessness if residing in rental housing and experiencing at least two of the following:

needing support to access or maintain a living situation;

The AHURI study is an important one at this fragile stage of the electoral cycle. It bridges the gap between what we officially know about the homeless and the ‘hidden homeless’ – those who are couch surfing, sleeping in their cars, house-sitting or doing the slow lap of Australia.

Even if you have a job, the next challenge is to find a rental property. This week our local paper, The Daily Journal, carried a report that the Southern Downs region has the lowest rental vacancy rate in Queensland (0.1%). The figure, a 10-year low, comes from a Real Estate Institute of Queensland survey of 50 local government areas.

While rentals in the Southern Downs are cheap compared to metropolitan cities (advertised weekly rentals start at $210 for a one-bedroom unit, to a three bedroom house in Warwick ($600). I am assured on at least an anecdotal level that the scenario is being replicated all over Australia.

The Federal Government’s main response to this shameful crisis was the National Housing and Homelessness Agreement (NHHA). The scheme started on July 1, 2018 and provides around $1.6 billion each year to States and Territories.

The NHHA included $129 million a year for homelessness services. States and Territories must match the sum applied for when claiming this money.

The NHHA identifies ‘priority cohorts’, which is public service jargon for people most in need of a roof over their heads. (Dehumanising language is but one of the many issues when considering homelessness. They are not ‘cohorts’ – they are people. Harumph. Ed)

Yes, it’s a depressing topic, but better solutions and attitudes could be developed, starting by not demonising those who either can’t find work or can’t work. Then we need to stop stigmatising those who for whatever reason have nowhere else to go.

In Nomadland, Francis McDormand’s character Fern is asked: “My Mum says you’re homeless. Is that true? Fern: “No, I’m not homeless. I’m just houseless. Not the same thing, right?”

I’ll leave you with a ‘three chords and the truth’ country song, Somebody’s Daughter by Tenille Townes.

Thanks for raising this, Bob. It’s bloody shameful that it’s an invisible issue in the current election campaign. I myself am already affected by the housing crisis. I do have a roof over my head, so I’m fortunate compared with many. But where I live is cramped , has insufficient storage, and no workspace for doing woodwork. And there is nowhere else around here for me. It would be well-nigh impossible to move on my income. The options, compared to 2-3 years ago, have vanished.