Henry Lawson and a plague of locusts 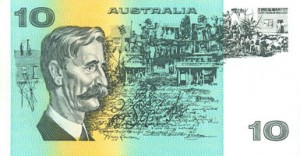 We were softly singing ‘Andy’s Gone with Cattle’ somewhere out near Sofala (western NSW), while picking out dead locusts from our radiator and various parts of the vehicle’s front grille. It was the Mike Jackson version of Henry Lawson’s classic poem we were humming, about a drover gone a-droving, with his missus and his dog pining for him. Mike told us he wrote his tune (one of many versions) in a minor key, as he read the song as a lament and felt the underlying melancholy of the minor key suited it very well.
We were driving across the western plains of NSW on our way to the Blue Mountains Music Festival when we ran into what some journalists would term “a locust plague of biblical proportions”.

Farmers out this way have been reporting swarms of locusts since late January and it seems they are still about. The cosmetic damage locusts inflict on vehicles does not compare to the damage they inflict on cereal crops in Australia.
Australian plague locusts reached such numbers in late 2010 that the world’s media picked up on the story because (a) it made for great television and (b) the statistics are sort of scary. A swarm of locusts one kilometre wide can chew through 10 tonnes of crops in a day. These ugly insects can consume up to a third of their body weight, so even low density swarms can wipe out an emerging wheat crop in a couple of days.

We arrived in Gulgong with a messy windscreen, planning a visit to the Henry Lawson Centre. Gulgong claims Lawson as a famous son, as he spent his childhood and early teens in locations between Gulgong and Mudgee. The environment and the experiences of these years greatly influenced Lawson. The Henry Lawson Centre walks the visitor through the phases of the writer’s life, from his birth in 1867 to his death in 1922.

As it turned out, a coachload of tourists beat us to the 10am opening, where they were being given a talk by Hazel, a local volunteer. Hazel let us know a few things we did not know about Lawson (e.g. he had a very productive period while living in New Zealand) and the things everyone should know – his influence on justice for workers, his advocacy for a republic, the plight of the poor, and support for the emancipation of women.

The Gulgong museum has some macabre artefacts of Lawson’s life, including a bronzed “death mask” of his right hand and the forceps a dentist used to extract all but one of Henry’s teeth (leaving him with the means by which to grip his pipe!).
There is also a first day cover from 1949, when Lawson’s image was emblazoned upon an Australian stamp. His craggy features also adorned the $10 note until the introduction of polymer currency in 1993. We need to reinstate Henry’s image on an Australian bank note. My suggestion would be to replace the Queen’s portrait on the $5 note when we become a republic.

I was amused and informed upon reading Lawson’s letter to the Bulletin magazine in 1903, the subject being his (temporary) sobriety. Problem drinkers could do worse than read this stark baring of the soul; the contradicting internal arguments, the ironic humour. You can find this on the Internet easily enough, which will save me breaching the “fair dealing” provisions of the Copyright Act. Lawson proclaims he is “awfully surprised” to find himself sober. He goes on to discuss drink and drunkenness and ask why a man does it to himself.
“I get drunk because I am in trouble and I get drunk because I’ve got out of it.”
“I get drunk because I had a row last night and made a fool of myself and it worries me, and when things are fixed up I get drunk to celebrate it.”
I spent an hour or so looking into Henry’s oeuvre, as I was fairly sure he had not written of locusts, but if he had, it would have been with the stark honesty he described his experiences in the bush. Lawson was often the bad cop, telling it like it was, whereas good cop A.B Paterson overly-romanticised the bush.

Lawson was sent out to Bourke by the Bulletin’s owner J.F. Archibald, the hidden agenda being to dry poor Henry out, as he was a perpetually broke drunk who often fell off the wagon. Lawson came back from western NSW with graphic images of the drought. In “Up the Country” he begins: “I am back from up the country – very sorry that I went.” He describes “burning wastes of barren soil and sand,” “barren ridges, gullies, ridges! Where the ever maddening flies – Fiercer than the plagues of Egypt – swarm about your blighted eyes.”
Henry Lawson’s work has often appealed to composers and folk musicians, who latched on to the easy meter of his ballads, the immaculate scansion and the succinct use of language.

The Gulgong Lawson Centre’s collection of CDs could do with some updating; the readings by Jack Thompson and Leonard Teale and the Slim Dusty album are just a representation of what has been produced.
At the very least, they ought to find a copy of Chris Kempster’s 1989 collection, The Songs of Henry Lawson (a second edition was released by the NSW Folk Federation in 2008). And former Redgum front man John Schumann and his Vagabond Crew are known for their Lawson album released in 2005.
We saw the Vagabond Crew perform this work at the Gympie Muster, when they engaged veteran stage actor Max Cullen to play the part of the ghost of Henry Lawson. The shabbily-dressed ghost, with battered hat and stick, would emerge from the ruck of the band as the song finished, reciting a poem and giving the audience a glimpse into the peripatetic life of one of our favourite literary sons.
There are many versions of Lawson’s poems set to music – ‘Andy’s Gone with Cattle’ and ‘Scotts of the Riverina’ in particular.
I have often marvelled at Lawson’s knack for observing whole landscapes and human longing in a handful of words.
“The gates are out of order now, in storms the ‘riders’ rattle,
For far across the border now Our Andy’s gone with cattle.”
“The old man burned his letter, the first and last he burned
And he scratched his name form the Bible when the old woman’s back was turned.”
(Scotts of the Riverina)

Poor Henry, chronically poor, deaf since childhood, not ever in robust health, pursued for maintenance by a needy ex-wife, he died of a cerebral haemorrhage, aged just 55 – an age which today is considered to be the prime of life.
Lawson’s life could become a major Australian movie, proceeds of which should go into trust to support promising writers; to help them get started, to send them to the Buttery if they fall off the wagon, and to stop ruthless publishers ripping them off.
Not that this is ever likely to happen under a conservative government or a monarchy.
“Wait here, second class.”