Home Friday on My Mind Ground control to Major Tom 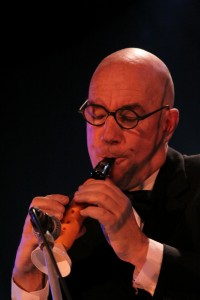 Today we’re taking a look at YouTube, 10 years old this month, a place where people can get noticed for making a clarinet out of a carrot (left) or singing a David Bowie song while floating in a spaceship. If you are not one of the 24.7 million people who have seen the YouTube video below, go make a cuppa and take five minutes out of your day. Watch it now, and then come back! I was typically late in catching on to Chris Hadfield’s cover of David Bowie’s Space Oddity. Commander Hadfield, a Canadian astronaut, performed Bowie’s 1969 epic in space. After striking a deal with Bowie’s publishers, he put it on YouTube for a year. The video had 23 million views before Hadfield took it down in May 2014 to honour the agreement. Over the next six months, the lawyers and music publishers who negotiate such things struck a new deal to have the video, um, relaunched. Meanwhile Hadfield got more famous in Canada than Tim Horton, and that’s saying something.

I decided to write about this Internet phenomenon after the sixth person I engaged in conversation about YouTube professed to not know what it is. So, if you just walked in, YouTube is a way of putting your home movies on the Internet and then trying to harness the attention of the millions of people who spend hours trolling through it looking for their pet interest.
My Kiwi nephew, for example, plays the bagpipes and has a long list of YouTube videos of really good pipers doing their thing. He saves them as “favourites” so he can watch over and over.
The thing about YouTube is you can get actively engaged, opening an account and creating a “Channel,” which allows you to upload your own videos, stream other people’s videos and save them for repeated viewing. Uploading means transferring your video file to YouTube’s servers, a process which can and does take many hours. “Stream” means you can watch, but you can’t legally download the video to your computer.

YouTube is a great way to browse the music of someone you may have read about or heard at a live gig somewhere. You may decide, as I did after checking out mandolin virtuoso Chris Thele, to buy several albums from Itunes. Or you might just develop a late-night habit of checking it out for free. Now that we’re mentioning late night YouTube browsing, there is dubious material on there, some of which might ask you to prove you are 18 (which amounts to clicking “yes I’m 18”). But to Google’s credit, they are keeping it reasonably clean.

There are a few myths about YouTube I’d like to put to bed, if I may. The persistent one is that once you upload a video, particularly a video of you performing your own original song, the copyright no longer belongs to you. Well that’s just an urban myth, according to the good folk at the Australian Performing Rights Association. APRA currently distributes performance royalties each quarter to the top 4,000 most viewed videos on YouTube (within Australia) in three categories, user generated content, record label content, and other studio content. They’re in the process of expanding this distribution to a large pool of songs.
The trap for beginners who make a cover version of someone’s song and post it on YouTube is that they need licensed Synchronisation rights from the publisher/s of the song. If a video is posted without having first had those rights cleared, the video may be blocked or taken down. Alternatively, the copyright holders may choose to let the video stay up, and instead have ads placed around the video.

YouTube’s own statistics show how big this has become:
• YouTube has more than 1 billion users in 75 countries;
• Views per month are up 50% year over year;
• 300 hours of video are uploaded every minute;
• Half of YouTube views are on mobile devices;
• 1m+ advertisers (mostly small businesses) use Google ad platforms;

While Google says 85% of its in-stream ads are “skippable,” usually the advertiser is going to claim your attention for six seconds, and for a savvy ad-writer, that’s all it takes.
A popular local musician in our own village, musician and innovative instrument maker Linsey Pollak, has made an impression on YouTube.
A video of Linsey at the Sydney Opera House making a carrot into a clarinet attracted 4.26 million views. The Tedx video went to nearly 62 million views when a Romanian Facebook Page edited the clip to make it shorter and re-posted it on their page.
Linsey says that while you can make money by “monetising”, he is not willing to have ads on his YouTube Channel.
“However I am constantly being approached by other Channels to partner with them in order to link to their channel (and Monetise).”
“There is a spin off in that my videos do get noticed and sometimes that leads to job offers, most of which come to nothing, but some do!”
He does most of his promotional work now on YouTube and cherishes it because it has created a “two-way conversation” between him and his larger audience.

Browsing on a rainy Friday night

So if you have nothing better to do tonight, go for a wander through YouTube. For sure you will get lost, somewhere between the myriad “how-to” videos, the moments of musical genius, bum-wiggling dancers and the current fad for getting your dog or cat to perform seemingly impossible tricks. Here are five diverse examples to get you started.
(right click mouse and select ‘open hyperlink’)
1/ The Blue Bird (Charles Stanfield) choral music by Matthew Curtis, singing all parts (and enjoying it). 16,266 views
2/ Beeswing – Richard Thompson (before he took to wearing his trademark beret)
548,578 views
3/ Dogs play bluegrass – it’s fake, but you’ll probably guess that.
1.12 million views
4 Bach’s Sonata No. 1 in G minor – IV – Genre-hopping musician Chris Thele won a $500,000 MacArthur Fellowship in 2012 (often referred to as a genius grant). He spent some of the money on “a very nice mandolin”). He started playing when he was two!
41,279 views
5/ Linsey Pollak turns a carrot into a clarinet, using a drill and a saxophone mouthpiece.
4.26 million views