Home Friday on My Mind Elephant captured on Nullarbor Plain 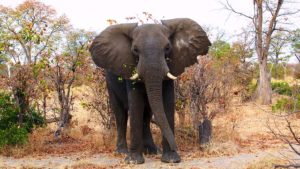 An African elephant dubbed ‘Ferd’ by social media followers has been cornered in an industrial shed near a roadhouse on the Nullarbor Plain. Ferd escaped from the Perth Zoo three months ago and has been spotted variously in WA and the Northern Territory. Facebook posts claimed sightings on Groote Eylandt.

Shed owner Tony is making a bit of cash on the side charging travellers $10 to pose for an elephant selfie. The Grey Nomad website www.welikefreestuff.dot described this as “exploitation” and lamented the lack of a seniors’ discount.

“It’s weird,” said Tony. “Everybody takes selfies to post on Facebook but nobody actually wants to talk about the elephant in the room.”

At which point you can see this  story about Ferd the elephant is not unlike the proliferating fake news stories on social media which commonly use a  headline and intro like this to suck you in. The more insidious fake news items, however, are portrayed as legitimate news stories and are often picked up and shared.

Satire is not fake news and vice versa

Some of the fake news websites which churn out stories cast themselves as satirists, but it is a loose label, apt to blow off in the wind. A yarn about an elephant wandering the Australian desert is probably satire.

It is satire when someone suggests the Pope is marrying (famous female pop singer) and running for the White House. Fake news is a story about the Pope endorsing Donald Trump (quickly debunked by hoax tracking website www.snopes.com.

WTOE 5 News, which broke the story, claimed that news outlets around the world were reporting on the Pope’s unprecedented endorsement. But Snopes found that no reputable news publications confirmed it, because WTOE 5 News, masquerading as a local television news outlet, does not publish factual stories.

But social media is not so discriminating. As Harvard University’s Nieman Journalism Lab pointed out, this fake yarn, which appeared in July, was shared almost 1 million times, versus 36,000 shares for the story debunking it.

One such story prior to the US election suggested the Amish had committed their vote to Donald Trump. Only 10% of Amish vote at all.

Another story suggested Barack Obama was abolishing the oath of allegiance in US schools. Sounds believable but simply not true.

Before people caught on to the idea of making money by spreading fake news on social media, the so-called supermarket tabloids cornered the market.

Here you will see obviously misleading headlines like “Diana is still alive” or “Hillary Gay Crisis” or “Aliens settle in San Francisco”.

By contrast, fake news stories circulated on social media prior to the election were entirely plausible – until you read to the end or read the website’s disclaimer.

But who has the time to (a) read the whole article before (b) sharing it or (c) checking out the veracity via factcheck.com or snopes.com?

David Glance, writing in The Conversation, says fake news is driven by advertising and is here to stay. Glance, Director of Centre for Software Practice, University of Western Australia, says a great deal of the recent fake news targeted at Trump supporters appears to have originated in the Macedonian town of Veles. Websites with legitimate-sounding names fed pro-Trump fake news, which in turn generated large revenues from traffic generated through Facebook shares.

Glance says it may be tempting to think that news from reputable media organisations is more reliable, but they too are still influenced by partisan opinion and the pressures to advertise and generate traffic and sales.

“Ultimately, there is no protection from fake news other than to adopt a sceptical view of all news and take the truth of it on balance of likelihood and confirmation from multiple reputable sources.”

Facebook and parent company Google say they are going to crack down on fake news sites. The New York Times reported last week that Google would ban websites that peddle fake news from using its online advertising service. Facebook updated its policy, which already says it will not display ads on sites that show misleading or illegal content, to include fake news sites.

So who are the people who spend their days (and nights) churning out fake news? Some publications have identified Paul Horner, described by Wikipedia as an internet news satirist and writer. Horner confesses to being as described and highlights a few of the stories he has written that have been picked up and shared by internet news sites. The Amish was his, so too Obama banning the oath of allegiance and Horner has recently told the Washington Post that he helped get Donald Trump elected.

Horner’s various websites pose as legitimate websites, but if you jump to the disclaimer, the author leaves himself an out by clearly stating that “…all news articles contained within are fiction, and presumably fake news.”

As David Glance observed, mainstream media is not immune to fakery, or at least allowing embellished news to be published. The blame is placed upon gutted newsrooms, where veterans with 20 years’ or more experience are replaced by school leavers and interns. The Guardian quoted an (un-named) journalist who described the pressure to perform online:

“So much news that is reported online happens online. There is no need to get out and doorstep someone. You just sit at your desk and do it and, because it is so immediate, you are going to take that risk. Editors will say, ‘The BBC got that six seconds before we did.’”

Some editors defend the bull at a gate approach as online news can be instantly updated (or taken down), when errors become obvious. FOMM can confirm this strategy as we have occasionally corrected minor errors on our website (it’s Hillary with two l’s, Bob).

“Is it not better to remain in suspense than to entangle yourself in the many errors that the human fancy has produced? Is it not better to suspend your convictions than to get mixed up in these seditious and quarrelsome divisions?”

Fake news stories only a problem if you read them

Facebook has been blamed by some commentators for helping The Donald get elected, but it’s a specious argument. Filmmaker Michael Moore said people in America’s forgotten ‘rust belt’ made their minds up about Trump years ago.

Moore was interviewed in July by www.cnn.com (a real news website), where he talked about the reasons why Trump would win.

“If he’s able to pull it off, it will be because on that day, a lot of angry white guys, a lot of guys who have a justifiable right to be angry — guys and women– who have suffered during the last decade,” Moore said.

Moore’s angry white men were never going to be swayed by fake stories about the Pope or the Amish, if indeed they read them in the first place.

I really enjoyed this . It got me thinking about the many sites I read on F’book. If I want to believe them I have to do a lot of checking. It’s taking a lot of time out my sitting on the verandah listening to birds. mmmmmm

Why is it everyone knew the National Inquirer and News of the World published dodgy stories but somehow FB gets a pass? More personal responsibility needed.
Mads