Home Friday on My Mind Don’t verb that noun, my friend

Don’t verb that noun, my friend 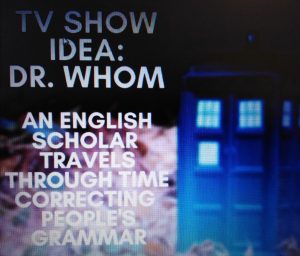 Image: This clever, tongue-in-cheek meme has been doing the rounds on social media – creator unknown (but thanks)

It doesn’t take much to cause members of the Ancient Order for the Preservation of Proper English (AOPPE) to fly off the handle.

A misplaced modifier, a literal, verb confusion, homophonic confusion (a pear of undies) or noun-verbing will do it every time.

There are old phrases akin to ‘fly off the handle’ (to lose one’s temper), in Tony Maniaty’s memoir of a half-Greek kid growing up in 1950s Brisbane.

Maniaty employs sayings of the day like ‘stone the crows’, ‘drunk as a skunk’ and (the book’s title), ‘all over the shop’.  The latter means in every direction, in a disorganised and confused state. It’s a British sporting term, originating in the 19th century.*

I’m impressed that they stick with me, given that every week, the SEO (search engine optimisation) programme in WordPress suggests that readability could be improved.

Most of us in the over-70 cohort, brought up on old-school grammar and spelling, will realise we are members of the aforementioned Order (which would, if it existed, have a lodge with disabled access, smoke alarms and a fire extinguisher, a white board and an urn for making herbal tea).

For this lot, spelling, grammar and syntax matters, as does punctuation, even when you overdo it, like I do; not that I make a habit of it – or end a sentence with a preposition, but.

You are certain to see members of the AOPPE emerge from the lodge clutching placards at the first sign of someone grumbling about the mangling of the English language. Let’s take just one example, a news report describing a group of people as ‘that’.

‘A group of concerned citizens that (who) did something’.

The more worrying thing about the Australian language in 2021 is that it so lacks the colourful sayings of my youth. There are examples aplenty in All over the Shop and Hugh Lunn’s memoir, (Over the top with Jim). They include choice phrases like ‘the cat’s got your tongue’ or   ‘you look like you’ve been dragged through a hedge backwards’. We all knew what they meant.

In my newspaper days, a young colleague did me a great favour, to which I responded, ‘your blood’s worth bottling’. He, a double degree graduate of our best university, said “Excuse me?”

I explained it was a supreme compliment but he said he’d not heard the expression, which originated with young diggers on the Western Front (1914-18).*

Maniaty uses Australian-isms of the 1950s when describing Brisbane at a time when many of the city’s timber houses were 10 foot off the ground on wooden stumps. He appoints himself narrator – right from the moment of birth. It’s an amusing artifice, a four-year-old dispensing futuristic wisdom. He tells Dad he ought to make yoghurt in little plastic pots and sell it in the shop, like ice-cream.

By the bye, many scholars have tried to track down the origins of ‘stone the crows’. All agree it derives from Australia and fits nicely with other mild oaths such as ‘stiffen the lizards’. Most would agree that expressions like ‘strike me pink’ or ‘strike me up a gumtree’ don’t really mean anything. They are just mild versions of ‘s*** a brick’ or similar.

Phillip Adams lamented in The Weekend Australian, August 1996, that most of the slang words of his childhood had disappeared. Or at best they appeared only in Dad and Dave jokes, copies of the Sentimental Bloke or the Macquarie Dictionary. Check and see if he’s right (words starting with D): drongo, dill, dinki-di, dinkum, dole, dukes, dag, daks, decko, darl, dazzler and daisy-cutter (an obscure AFL term). How many of those 12 words do we use in conversation today? (2- Ed.)

Adams reckons there are 120 Aussie terms for inebriation (and 30 for vomiting). I recall one choice phrase: ‘talking to God on the big white telephone’ which manages to encompass both.

Tony Maniaty’s Mum had a couple of mild phrases to describe  drunken behaviour such as ‘drunk as a skunk’ or ‘full as a boot’.

The rollicking days of Bazza McKenzie not withstanding, our unique language has been infiltrated by Americanisms and the abbreviated ‘language’ of social media.

As Hugh Lunn said in the introduction to his collection of old Australian slang terms: “If we adopt the language of another society we lose the rights of memory in our own kingdom.”

Lunn amassed a vast collection of Aussie-ims from the 1940s and 1950s when writing his memoir, ‘Over the top with Jim’.

Later, he wrote amusingly about the vernacular in another book, ‘Lost for Words’ (which sold 40,000 copies). When I pulled this 2006 tome from the bookshelf, I found the Adams article, which I had been using as a bookmark.

Although I was born in the late 1940s, I confess ignorance of sayings in this book like, ‘It’s snowing down south’ (your knickers are showing) or ‘he’s all mouth and trousers’ (referring to a boastful person).

The misuse of the Queen’s English is another matter altogether. There are many instances like the one in last Saturday’s Weekend Australian), where the reporter or sub editor literally put his or her foot in it. They reckoned the takeover of ME Bank by BOQ was ‘no shoe-in”

My pet peeve (or bugbear), is when reporters and others use a noun as a verb. A classic example oft-used on TV news is ‘residents were impacted’. Ahem. They would only be impacted if they had an unfortunate bowel or tooth condition. The proper word is affected.

Grammarians refer to verbing a noun as denominalisation. This explains the process by which nouns (passive words), slink their way into the domain of doing words (verbs).

Instead of saying ‘why don’t you sell it on eBay” the noun becomes a verb – “Just eBay it.”

The BBC’s Brandon Ambrosino chose a Calvin & Hobbes cartoon to illustrate an article on noun-verbing.

“I like to verb words,” Calvin tells Hobbes. “I take nouns and adjectives and use them as verbs,” he explains, citing the word “access.” “Remember when access was a thing? Now it’s something you do.”

As Strunk and White’s Elements states:  “Many nouns lately have been pressed into service as verbs. Not all are bad, but all are suspect.”

So, whether your blood is boiling or worth bottling, you should not replace proper English expression with millennial nonsense like Dude!, Whatever, Just saying, LOL (laugh out loud) or OMG (which people of my era may think means Oh My Giddy Aunt).

As Adams wrote 15 years ago, “our verbal biodiversity is being replaced by the mealy-mouthed and mass-marketed.”

Strewth! Strike me pink, Bluey. You can say that again.

OK, it seems ‘snowing down south’ meant that a woman’s petticoat or slip was showing. Miniskirts came later. Good read, but.

My feeling is that outrage against a verb converted from a noun usually happens only when the usage is novel. It’s hard to justify outrage on traditional or grammatical grounds, because to be consistent you’d have to hunt down all the established examples, including the few mentioned in this OUP language post: This conversion of nouns to verbs is known as ‘verbing’ and it has been around for as long as the English language itself. Ancient verbs such as rain and thunder and more recent conversions such as access, chair, debut, highlight and impact were all originally used only as… Read more »

Thanks for the letter, Bob. I’m with you.
Wyn Drabble