If it doesn’t rain soon, mate 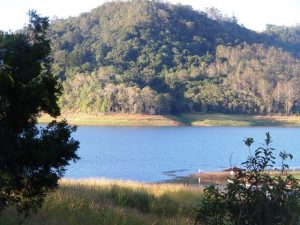 Conversations in the street of any Australian town often involve the weather, which over the past four months has been bereft of rain or “dry” (pronounced “droy.”

Tim: “Nothin’ but mud and mosquitos.”

Mrs Harold: “If it doesn’t rain soon, mate, we’re gonna move back to the town.”

The latter is the narrator’s refrain from one of my songs; the laconic farmer, chin up as usual, watching the ABC. He’s being harassed by the banks, making do with pumpkin scones and home brew and tells the wife that if she must pay bills, pay the one with the lawyer’s letter – today.

Australian farmers are well-used to the vagaries of the weather – droughts, floods and, when it’s too dry, fires; not to mention the bastardry of banks. We’re not in drought as such, but a period of what the Bureau of Meteorology (BOM) calls “rainfall deficiencies”. Much of Queensland, where we live, has been rain-deficient since the end of October.

The Bundaberg region has just this week been drought-declared, after enduring its hottest summer since 1897. So things could be worse.

A particularly hot summer in much of New South Wales and southern Queensland exacerbated the effects of below-average rainfall.

The other day, we took a trip down to our local water reservoir, Baroon Pocket Dam, which is currently at 46.5% capacity. Lake McDonald, near Noosa, is at 53.5%. Our local newspaper, the Sunshine Coast Daily, published a dramatic aerial photo of Lake McDonald last week. Doonan resident Dave Yabsley employed a remote-controlled drone to capture images that showed once-full patches of the dam reduced to puddles.

Our eyewitness report (and photos), from Baroon Pocket paint a less dramatic but equally serious picture.

However, SEQWater, the statutory authority responsible for supplying reticulated water in South East Queensland, says its network of 12 dams is at 71.2% capacity. So, overall, we are not in bad shape. As an SEQWater spokesman said, “We are at least another wet season away from having to consider water restrictions.”

SEQWater spokesman Mike Foster told the SCD that in our immediate area, drinking water has been pumped up from North Pine Water Treatment in Brisbane since February 7.

Now there’s a bit of information for local residents, especially those who complained loud and long (e.g. me – Ed.) when SEQWater first built the pipeline to pump water 96 kms from Baroon Pocket Dam to North Pine (Brisbane). The rationale at the time was to top up Brisbane from the (normally) rain-blessed hinterland. Now, in our time of need, we see that water flows both ways, although in this instance, uphill. I doubt local songwriter the late Mark Gillett had that scenario in mind in 1986 when he wrote his award-winning song for the environment, “Watching the Obi Flow”.

SEQWater may be confident, but what about the 186,000 people in the SEQ catchment who live outside of areas serviced by town water? They have to rely on rainwater tanks and/or bores, and if the tanks run dry, they have to pay for someone to have them re-filled. It’s a bit of a gamble, as one decent rainstorm will top a tank up quite nicely. As for bore water, this will decline also, if there is not enough rain to feed the aquifer.

The BOM is predicting a dryer and warmer than average autumn (March to May) across much of Australia.

“Australian climate patterns are being influenced by the long-term increasing trend in global air and ocean temperatures.

“Without a strong influence from the Indian or Pacific oceans, secondary climate drivers contribute more to the outlooks.”

Bureau records show that autumn rainfall has been in decline over much of southeast Australia for 22 of the past 26 years.

Or as our over-extended farmer sings in “Mate”:  “They say El Nino’s here to stay and I can’t prove ‘em wrong, we oughta get old Bill Scott out here and sing that bloody song.”

The reference is to the late folklorist Bill Scott’s much-covered folk song “Hey Rain!” about Innisfail (north Queensland), one of the nation’s wettest towns. Here’s a well-known version by Penny Davies and Roger Ilott.

Innisfail and nearby Tully aren’t just wet, they (usually) have a wet season − a monsoon − which in 2017 has delivered 1,768mm over 53 days. That’s just under Maleny’s annual long-term average of 1,868mm.

Sadly, the diligent person who maintained Maleny rainfall records passed away in spring last year, so recent rainfall data is not available on BOM’s website at present. According to records kept by a Stanley River Road resident, we received 415.8mm between November 1 and February 28 and 14mm for March thus far.  Compare those paltry summer falls with the Nov-Feb long-term average (1,206mm). In our big wet (2010-2011) Maleny received 646mm in December and 999.5mm in January – for a four month tally of 1,938mm.

I was distracted from this provincial stream of thought by a foreign news report that shows Australia’s not the only country where drought and excess water use causes problems. Iranian environmental policy expert Kaveh Madani told the New Internationalist Iran had exhausted its surface water supply and depleted groundwater by 70%. While the Iranian government is responding with engineering solutions (transporting desalinated water to drought-affected areas), Madani says citizens should be encouraged to reduce water consumption.

Kerman Province, which once accounted for 70% of Iran’s $1.5 billion pistachio market, has been hardest hit by the water crisis.

Mohammad Reza Bakhtiari, former head of the Kerman Regional Water Authority, said groundwater withdrawal in Kerman was six times the acceptable average. He told the Financial Tribune that annual rainfall had dropped from 250mm per annum a decade ago to 204mm over the past four years.

“At present even providing the residents of Kerman (pop 2.93m) with potable water is a challenge,” he told Iran’s English language economic daily.

A confronting article in the Guardian Weekly stated that famine could kill 20 million people in Somalia, South Sudan, northern Nigeria and Yemen within six months. This includes 1.4 million children at “imminent risk of death”. Drought in 2016 and a poor prognosis for the spring could put up to half of Somalia’s population at risk, due to acute food shortages.

But as a man from Lightning Ridge said to me yesterday: “We’ve always had droughts – it’s just a cycle.”

I’m sure that will be of great comfort to those facing famine.