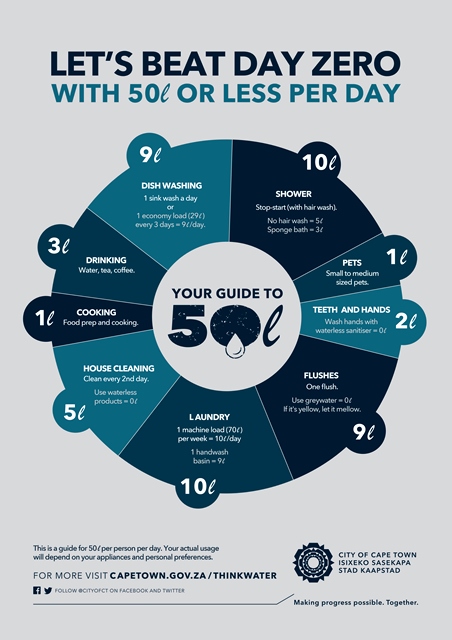 Graphic courtesy of the City of Cape Town

Well-organised journalists keep detailed diary notes on the stories they have written, with the objective of writing updates. This is how the media knows when to descend on the courts when a murder trial finally starts. Or the updates could be on Twitter.

From my lazy post-city desk where I opine and inform about random topics, updates rarely occurs to me. Yet the same subjects crop up again and again: climate change, global warming, ocean pollution, poverty, refugees, fast-changing technology. Yes, who’d be a technology writer today? Blink and you’ll miss it.

So to the updates: you might recall I wrote on February 23 about Cape Town, South Africa, and how it was in danger of running out of drinking water. The city authorities have now decided to defer ‘Day Zero’, when all taps were to be turned off and people would have to queue for water at standpipes.

Nearly a month later, the city authorities, having postponed Day Zero from mid-April to early June, have pushed it out to 2019, on a date to be notified. Level 6B water restrictions are still in place and residents are being asked to limit daily use to 50 litres each.

Cape Town may not have thought ahead far enough to provide the buffer it might need after three years of drought, but they are making up for it with a well-thought out campaign to urge people to save water.

They’d need to, because even though combined dam levels are back to 23.6%, if the level drops below 14%, Day Zero looms again. Cape Town’s authorities are aiming to reduce average water use to 450 million litres per day (last week it was 537m litres). When I wrote my column about this, I was harking back to South East Queensland’s dire days of drought, when our combined dam levels fell below 20%.

Brisbane implemented Level 6 water restrictions, which, if you don’t mind an empty swimming pool and a dirty car, are not too onerous. At that time, people in South East Queensland reduced their daily water consumption to 140 litres per day (half the average use).

Check out the graphic from the City of Cape Town (above) and you’ll get some idea of how bad it could be, even though we now have a Drought-Ready plan.

In a curiously related aside, Cape Town recently had its own outbreak of listeriosis, not (as in Australia) from contaminated rock melons, but from processed smallgoods (with the responsible firm being named).

Earlier in February I joined the outrage over the disposal of two ex-government filing cabinets, stuffed tight with confidential documents from the Department of Prime Minister and Cabinet. The ABC ran a series of stories based on the documents before handing them back (to ASIO).

Not much in the way of updates on that front although PM Malcolm Turnbull, after saying ‘heads would roll’, called for an inquiry and appointed senior public servant Ric Smith to the task. The terms of reference released on February 21 promise a preliminary report in March.

While the Canberra press gallery are waiting for the updates Smith continues with his task of finding out how it happened and how to make sure it never happens again. Smith would appear to have a job on his hands as this was no one-off; the Canberra press has published multiple stories involving confidential documents and diaries turning up in unsecure locations.

For instance this week Canberra Times reporter Andrew Brown turned up a similar story, albeit from 2013. The Department of Social Services sent old filing cabinets to a second hand store. The cabinets turned out to be full of personnel files, with personal information including security clearances. Brown found the un-named resident who, having established what he had bought, spent his own time trying to give the documents back to the department. Only when he wrote to the department was action taken and the cabinets collected.

A Department of Social Services spokesman said handling processes were ‘reviewed and updated’ as a result of the breach.

In early January I tried to lighten global nuclear conflict anxiety by revisiting a list of protest songs. This column was notable for the many examples of readers telling me, “Oh but you forgot about Good News Week…”

That’s the trouble with lists: after you’ve read them you wonder why the author bothered. You know the click-bait headlines: “These 12 amazing boob jobs will blow your mind.” And so on.

I’ve been noticing these cartoons of North Korea’s leader and The Donald facing off with missiles, one noticeably longer than the other.

I do wonder how this larrikin symbolism is interpreted in the Democratic People’s Republic of Korea. Mind you, the average NK citizen would never be allowed to see such salacious mischief on their heavily censored Intra-net.

After the fact, I was reading a fascinating book by Simon Winchester who in an astonishing feat of literary and journalistic ambition sums up the history of the Pacific Ocean in just one book. I’m two-thirds of the way in and he gets my vote thus far. The first chapter in Winchester’s Pacific covers the history of nuclear testing in the Pacific.

Winchester does not hold back, telling of the uncaring, nay brutal way the islanders of places like Bikini atoll and the surrounding Marshall Islands were herded up and deposited ‘Elsewhere’ while western forces went about perfecting atomic weapons.

He reveals that between 1946 and 1958 the US detonated 23 atomic bombs on or near Bikini Atoll. Though they moved the islanders, ‘Elsewhere’ did not provide them with enough food. So, half-starving they were transported to another Elsewhere (which did not have a coral reef so they were unable to practice the traditional lifestyle).

Still, it had enough food.

All told, between 1946 and 1962 the US exploded 105 atomic devices in the Pacific. The back story to this is a minefield of missed targets and mishaps, claims and counter-claims, compensation and persistent radiation levels.

I’d recommend Winchester’s book for the thorough way he covers any question which might arise about complex subjects concerning the Pacific; the Ring of Fire, tectonic plates, how Korea became two countries, the theory of continental drift or how surfing became a mainstream sport.

If you want a recap of the Bikini saga, the link below is as good a place as any. Georgetown University’s Timothy Jorgenson covers the sorry history of US atomic testing in the Marshall Islands chain.

He starts with a reference to the genesis of the bikini (swim suit). Who knew that the original 1946 design by Jacques Heim was dubbed ‘Atome’ (French for atom)? Allors!

Oh, and let’s not forget the 193 nuclear tests France carried out in Polynesia between 1966 and 1996. Tests were stopped largely because of protests inspired by the New Zealand government’s nuclear-free stance.

In light of all that, you’d have to wonder why all the fuss about North Korea’s six (6) nuclear missile tests. Whatever case I’m making about super powers, hypocrisy and exploitation of huddled minorities, I rest it here.