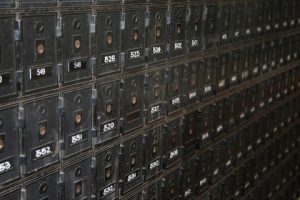 Some of my rural readers have been writing impassioned letters about a troubling domestic issue (the rising cost of renting a PO Box).

“When we knew we’d be moving to Maleny, we applied for a PO Box. “When we arrived here on Dec 22nd, 1993, the post office was still in the old house on the corner of Teak St.

“They kept saying (once we presented ourselves in person), that there were no private mailboxes to spare, so we had “poste restante” status for quite a while. Once the new Riverside Centre post office opened, we were finally able to rent our new PO Box: the fee was $40 p.a. (1995-96).

“When I recently received the renewal notice for my standard P.O Box, I could see it was going to cost me $129. Frankly, it seemed a waste of a Pensioner’s Pittance. Australia Post offered a $5 discount if you paid before March 31st (but nothing for pensioners!)

“So, after almost 24 years I have let go of my town lifeline.”

Yes, we hear you, Perplexed Pensioner. We decided there was not enough mail arriving in our private mailbox to justify the expense.

Ironically, when we inquired about getting a six-month mail redirection, we found that these rates too would rise on April 3.

When reviewing essential household mail, I discovered that 80% of our bills and official communiques arrive via email.

In line with similar issues facing postal services in all countries, revenue has been squeezed by online transaction services. Moreover, operating costs in this labour-intensive business (Oz Post employs 36,000 people), keep on rising.

As always, Australia Post is constrained by its obligation to offer postal services to all, no matter where they live.

Next time you gasp at the cost of posting a letter or parcel, Australia Post’s 2016 annual report confirms that losses for its regulated postal service over five years now total $1.29 billion.

If I had to mail this newsletter to FOMM subscribers, it would cost more than $500 per week, including envelopes, stamps, printing and labour. That would mean I’d have to pass the cost on to you, dear reader, market forces driving me to embrace the profit ethos.

Australia Post’s letter volumes peaked in 2008, according to its 2016 annual report. In the eight years since, volumes have declined by 41% per letterbox. We have seen this happen in our private mail box too.

Perplexed Pensioner referred us to a blog by Anny, a calendar-maker. She took Australia Post to task in 2014 and again this year for what she sees as price gouging, including a list of PO Box price rises compiled from her records of invoices (from $55 in 2004 to $129 in 2017).

While price increases in recent years have been well above average annual inflation, increases have been smaller since 2014.

“From February, Post Office (PO) Box prices increased by an average of 2.7% across the product range,” an Australia Post spokesperson told FOMM. “Like many businesses, Australia Post is operating in a challenging economic environment with increasing costs and competition.”

Local correspondent Little Bird says the cost of private mail boxes is a can of worms for the minority of Australians who do not have street delivery.

“Because we don’t have street delivery we pay a discounted rate, but I think it’s still a bit rich when everyone else gets their mail delivered for nothing.

“Also, since we live out of town it also means they won’t deliver parcels out here. The Australia Post-aligned couriers won’t deliver here either. (There are some which contract to Australia Post and some which do their own deliveries). So the sender pays a courier rate to have something delivered and it still goes no further than the PO Box.”

Australia Post responded: “Residents living in areas that receive a street delivery service less than once per week can collect mail over the Post Office counter for free. As PO Boxes are an optional delivery service (they), may be eligible to lease a PO Box at a reduced rate.”

Hefty price increases are not uncommon after government-owned essential services are corporatised or privatised.

So let’s be clear about one thing – Australia Post is still 100% owned by the Commonwealth Government. However, since 1989 (when, incidentally, a stamp cost 41c), it has been run as a Government-Owned Corporation.

It is run very much along private company lines – many of its post office shops are privately owned and along the way Australia Post bought its own courier service (StarTrack) to compete with rival courier services.

The Institute of Public Affairs has lobbied for the government to fully privatise Australia Post and found supporters in the Productivity Commission and the Australian competition watchdog (the ACCC).

Australia Post was ranked fourth in a survey of the world’s best postal services, interestingly led by the government-owned and operated US Postal Service

While Australia Post competes with the digital world by offering an array of electronic services, most people just want to post a letter, card or parcel to someone and trust it will arrive within the week.

So while we have cancelled our private mailbox, we can still rely on the humble postie delivering to our letter box. They deserve a medal, going out in all weathers, dodging swooping magpies, skateboarders and hostile dogs. We were given updated figures that show there are 11,000 ‘posties’ servicing 11, 240 postal routes around Australia. Motorcycles are used for delivery on about 6,000 routes, bicycles on 900 routes and about 900 intrepid posties walk their routes, all delivering to 11.6 million locations.

On a round-Australia trip in 2015, we encountered a group of 40 men and women riding 110cc ex-‘postie’ bikes from Brisbane to Adelaide via Birdsville and remote desert roads. Members of the group paid about $5,000 each for the privilege. The cost included an ex-‘postie’ bike, all accommodation and support while en-route and a flight home. Riders were encouraged to donate their bikes to Rotary at the end of the ride.

This seems a worthier use of energy than complaining (futilely) about Australia Post and its ongoing quest for profit. You could instead enjoy a vicarious few weeks experiencing much what it must feel like to be an all-weather ‘postie’. You could send postcards to your friends from every destination (at $1 a time), confident in Australia Post’s claim that it delivers 96.2% of domestic mail on time.