Australia Day and the Highland Clearances 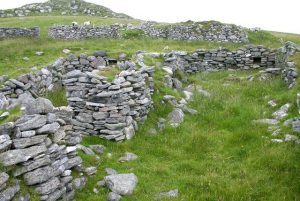 Image: Ruined croft houses on Fuaigh Mòr in Loch Roag. The island was cleared of its inhabitants in 1841 and is now used only for grazing sheep. Wikipedia/Sarah Egan CC.

Australia Day came and went and alas, not once did I think about my birthplace, Scotland, or the country where I spent my childhood (New Zealand). The older I get and the further away from my Citizenship Day ceremony (January 26, 2000), the more it seems I have assimilated.

Regardless, it is some admission from an iconoclastic alien, someone who had to be repeatedly pressed by the family lawyer to become an Australian citizen. Prior to 2000, I was a British citizen with permanent resident rights in New Zealand. I held an EU passport (what a relic that soon will be), with a return visa which over the years saw increasingly stringent conditions attached.

In the 1970s, when we first set off from New Zealand on our “OE” (overseas experience), we did not need a passport at all. When leaving New Zealand to visit Australia, we just filled in a two-sided visitor card; on which as it became apparent, too many people entered fictitious details.

Immigration Minister Ian McPhee introduced passports for Trans-Tasman travel in July 1981. The main aim was to stop abuses of the Trans-Tasman Travel Arrangements.

Until that time, Kiwis and Aussies were free to travel back and forth to either country to live, work, play and inevitably meet their life partners and settle in one country or the other.

While it may now seem like folklore, the free and easy Trans-Tasman arrangement fell apart due to revelations about the Mr Asia drug syndicate run by ruthless Kiwi criminal Terry Clark.

He was 2IC of the syndicate in the late 1970s, but rose to the top by ordering the killing of syndicate head Marty Johnstone. The influence Clark and his couriers had on importing heroin into Australia has been well-chronicled. The sordid story was also dramatized in Channel Nine’s Underbelly series.

The years between 1978 and 1983, when Clark died in a British prison, were trying times for law abiding, adventurous Kiwis who travelled across the ‘Dutch’ to work. Young Kiwis thought of Australia as the equivalent of eight countries (six states and two territories), with six times more people, hence unlimited job opportunities. They were escaping New Zealand at a time when unemployment was around 7%.

Australia’s unemployment was also high, but New Zealanders came looking for jobs with a built-in reputation for punctuality, honesty and hard work, Terry Clark notwithstanding.

When I became an Australian citizen on Australia Day 2000, I’ll admit I went into it a trifle blasé – for me it was a necessary formality. But the event in Brisbane Town Hall brought out a lot of emotions as I realised, in company with 699 others, many of whom were refugees, that for some people this ceremony was literally life-saving.

So to Australia Day 2020 and I’m watching the Wugulora Morning Ceremony on ABC TV. It is being held on the lawns of Sydney’s best-known waterside location, Barangaroo.  As an armchair viewer, I was immediately touched by the dancing, singing and ceremony, not to mention appropriate speeches by NSW Governor Beazley and NSW Premier Gladys Berejiklian.

For me, the televised spectacle was exemplified by a young Aboriginal boy holding aloft two flags – in the right hand the Commonwealth’s symbol of colonial power and in the left the red, yellow and black Aboriginal flag. There was a decent-sized crowd there on the foreshore and the overall impression was one of peace, reverence and inclusion.

Elsewhere in Sydney that day, 10,000 [people marched to protest ‘Invasion Day’, the central tenet of which is that Australia Day should not be held on the day Queen Victoria’s vassals took the country by force.

As someone who was not only born in Scotland, but can trace ancestry back through the same small coastal fishing village to the 1700s, I should know more about the Highland Clearances or the ‘eviction of the Gaels’ than I do.

The eviction of rural tenants between 1750 and 1860 was driven by Scottish lairds, some of whom may have been English or at least owed money to the English. They drove the changes to increase their income and pay off debts.

Previously, farms were run on the runrig system of open fields and shared grazing. These collectives were replaced with large-scale pastoral farms stocked with sheep. Rents were much higher, with many displaced tenants forced into crofting communities, to be employed in fishing, quarrying or the kelp industry. The sudden demotion from farmer to crofter caused much resentment.

Between1815 and the 1850s, as a result of famine and/or collapse of crofting industries, crofting communities lost the means to support themselves.  Assisted passages became commonplace, with landowners paying for their tenants to emigrate.

Some of this sounds a little bit like the oppression of Australia’s Aboriginal people, dispossessed and eventually herded into State-run settlement or missions.

Census papers list my forebears’ occupations as ‘agricultural worker’, ‘crofter’, ‘railway gatekeeper’, ‘flax mill worker’ or ‘labourer’. There is a high school teacher in the family tree, but in the main the Wilsons were working people and for centuries stayed in the one place. That is until my Dad had an epiphany and started looking for work in another country under the ‘assisted passage’ scheme. We missed out on going to Ontario for reasons which were never discussed with mere children. Instead, we were booked to sail to New Zealand in the southern winter of 1955. We arrived in Wellington and then took a night train to a small town in the centre of the North Island.

This week we watched the documentary, Gurrumul, a unique glimpse into the late indigenous singer’s life in a remote Arnhem Land community. Gurrumul became famous the world over, singing his own songs and stories in the Yolngu language. He touched people with his music, even when they did not understand the lyrics.

According to custom, the Yolngu people request that the names and images of tribal people not be used after their deaths. In Gurrumul’s case, they made an exception.

In a similar vein, Scotland has produced numerous bands that sing in Gaelic, including Manran, a band that recently toured Australia. I find myself moved in a spiritual way by Gurrumul’s music just as the often patriotic songs of modern Gaelic bands give me goose bumps. We don’t understand the content but we absorb the emotional message.

I’m never sure how many people actually look up links, although I must recommend  the intriguingly-named Red Hot Chilli Pipers. I will leave you with this snippet from this energetic nine-piece band.

As always, the skirl of the bagpipes sends shivers down the spine and brings goose bumps to the forearms. Once a Scot always a Scot.