Asylum seekers and the seven-year itch 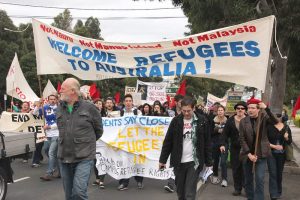 If Home Affairs minister Peter Dutton ever had a lapse in judgement, it would be thinking that asylum seekers and their supporters have given up. Over a seven-year span, Mr Dutton and his predecessors have exposed asylum seekers to a punitive system (which is outside the UN Convention on Refugees).

As you may hear this weekend, Sunday marks seven years of detention for those who were sent to centres on Manus Island and Nauru. At the time, former Prime Minister Kevin Rudd announced that people arriving by boat to seek asylum would be processed offshore and never be allowed to resettle in Australia. #7yearstoolong

The now-famous author Behrooz Bouchani chronicled his torturous life on Manus Island in the award-winning book, ‘No friend but the Mountain’. in 2019, Australians became more aware of the effects of despair and mental health issues suffered by asylum seekers in our offshore detention centres. There was a seemingly effective campaign to Get the Kids Off Nauru. All the while, the Australian government continued to be responsible for those much-criticised centres (outsourcing the task to private security firms). Along the way, the government re-opened, closed and then re-opened again the Christmas Island detention centre, Christmas Island being an Australian protectorate.

During the past seven years, the numbers of people who have started or joined an existing asylum seeker support group have grown, to include such organisations as Rural Australians for Refugees.

This national movement started with a campaign by the good folk of Biloela, who took in a Sri Lankan family. You’d know about this saga, where authorities came in the early hours and removed the couple and their two children, taking them into detention. Over time, the family of four ended up being the only detainees in the Christmas Island Detention Centre, at a reported cost to the taxpayer of $27 million a year.

Closer to home, a Kangaroo Point motel has become the focus of the protest movement which wants to see an end to our egregious treatment of people whose only possible mistake was to pay a people smuggler to bring them to Australia – irregular, but not illegal.

Asylum seeker supporters fought long and hard to challenge the government to bring unwell detainees from offshore detention centres. This resulted in a new Act which forced the government’s hand. Even though people needing medical attention were brought to Australia, it seems that few of those brought here under the Medevac Bill have been released from detention. A lot of those people ended up at a motel in the Brisbane inner city suburb of Kangaroo Point.

As Hannah Ryan wrote in The Guardian last month , the Australian government engaged private guards and assigned them to the Kangaroo Point Central Hotel & Apartments, describing it as an “alternative place of detention”. Here, 120 people who had been detained on Manus Island or Nauru and were sent to Australia for medical treatment, are being kept indefinitely. They are not allowed to leave, as Ryan says “not even to visit the KFC across the road”.

Since COVID-19 raised its head in March, they are not allowed visitors either. Over the year or so this has been going on, some detainees took to holding up placards from the motel balconies, when allowed out for fresh air. Support networks got wind of this and a series of rallies began, not without some risks. At a rally on June 29, 40 protesters were arrested for staging a sit-in after the two-hour permit had expired.

Public protests aside, Home Affairs minister Peter Dutton is pressing on with a draft Act designed to crack down on drug dealing and the development of terrorist cells. The draft Act would make it illegal for people in detention to have a mobile phone.

Just think about that for a minute, while realising how crucial your mobile phone has been to you through the COVID-19 lockdown.

Australia’s Human Rights Commissioner Edward Santow made a submission to a Parliamentary committee, saying that the bill should not proceed. Writing in the Canberra Times, Santow said:

“The Commission recommends that risks be considered on a case-by-case basis. If a particular person in detention has used their phone to commit illegal activity or endanger the security of Australia, this would be a reason to prohibit them from having a phone. But it would not justify a ban that applies to other people who haven’t been shown to be a risk.”

The government said when introducing this Bill that it did not plan to introduce a blanket ban on mobile phones, rather to address risks to health, safety, and security.

Those protesting on Sunday have made it clear what they want – an end to indefinite detention. As stated in Green Left Weekly (where you will find a list of rallies and gatherings and their locations): “Free the refugees and bring those still on Manus Island and Nauru to Australia now.”

The COVID-19 pandemic and its consequences have pushed this issue onto the media back-burner. The recent closure of some media outlets and the migration of others to online only has further diluted the message.

So emerged the hashtag #7yearstoolong on social media as volunteer groups try to raise awareness of institutionalised inaction.

While the government continues to take a hard line stance, a survey last year showed that attitudes towards refugees are hardening. Part of a global study on attitudes, it shows that 44% of Australians think borders should be closed, up 5% on the 2017 survey.

Globally, 54% of people doubted whether refugees coming into their country were really genuine and not arriving just for economic reasons. Australians’ doubts about people’s motives rated lower, at 49%. About 42% of Australians agree that refugees successfully integrate (a drop of three points since 2017).

Refugee Council of Australia statistics show that at March 31, 2020, there were 1,373 people held in onshore detention centres. Apart from any other consideration, it is costing Australia an estimated $137.34 million a year to keep refugees in domestic detention, based on figures provided by the Kaldor Centre.

And, did you know that 64,000 foreigners have overstayed their Australian work or tourist visas, with up to 12,000 believed to have been here for 20 years or more?

All of the above, I contend, should be seen in the context of Prime Minister Scott Morrison’s plan to allow Hong Kong Chinese safe haven in Australia. (Ed: “Probably because they would be well off financially”

Oh, that’s right, we are still in thrall of the ultimate strong leader (John Howard), who said in 2001 his government had an irrevocable view on border protection: “we will decide who comes to this country and the circumstances in which they come.”

Every leader from Kevin Rudd onwards has toed the same Sovereign Borders line. If you are expecting anything different from the Leader of the Opposition, should he ever win an election, do not hold your breath.

Further reading: This Australian Government policy paper sets out the facts and dispels myths about asylum seekers and refugees.

We are travelling in remote western Queensland, so expect one from the archives next Friday.

*Tom Hanks’ companion in Castaway was a volleyball, not a football as I wrote last week (and the Hug Patrol photo was from 2012, not 2019).