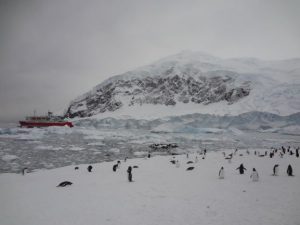 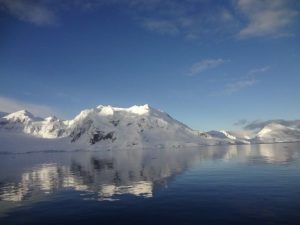 For most people who like to travel, Antarctica is probably not on the list of places they aspire to visit. I say that because, although visitor numbers to the frozen continent have risen 50% in recent years, the numbers are tiny on the mass tourism scale.

People with some curiosity about the seventh continent can satisfy it by reading books or viewing any of these recommended documentaries.

For many people, following in the footprints of Scott and Shackleton is more than a bucket list item. For them, touring the South, snapping multiple photos of penguins and albatross or kayaking in the path of mighty icebergs, is a lifetime ambition.

A family member, John, realised a long-held ambition in 2017 when visiting Antarctica with his wife and daughter. On the 21-day cruise, the ship re-traced the voyage of Ernest Shackleton. In 1914, the explorer crossed from South Shetland Island to South Georgia. He and a five-man crew then set off on foot, the first crossing of the island. The latter day tour included stopping at Shackleton’s  grave and toasting him with Irish whiskey. Some comments from their tour:

“Each day we’d go ashore in the morning and view seal and penguin colonies.

“We also visited an old whaling station where they carried out whaling on an industrial scale.

“After South Georgia we sailed to the Ross Sea, but we didn’t get very far because of large icebergs. We were constantly changing course to avoid them.”

Antarctica does not belong to any one nation, so no visa is required to visit. However your country of residence must be a signatory to the Antarctica Treaty. It’s a long way to travel, expensive, and there is no direct route.

Most tourists do it with a combination of air and cruise or cargo ship travel. One common route is Brisbane-Sydney-Ushuaia (a southern Argentinian resort town and port), then by ship to Antarctica. As an alternative to the return journey, adventurers may travel from the Ross Sea to Invercargill/Bluff in New Zealand then fly to their home base from there.

The travel advisory for Antarctica is currently at level two (exercise increased caution). Just how many people travel to the continent between November 2021 and March 2022 depends on the status of the pandemic.

US citizens (who comprise 34% of visitors), will need to prove they are Covid-free before re-entering the US. This may or may not be a deterrent.

Antarctica expeditions are probably out for Australians this year, given a ban on leaving the country for other than compelling reasons. Likewise, Argentina has a travel ban in place, which makes it difficult for many tours that use the South American country as a launching pad. 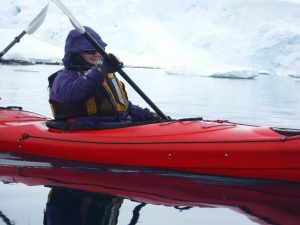 A writer friend, Dale Lorna Jacobsen (left), first travelled to Antarctica in 2013. She was one of 25,284 visitors who set foot on land that summer. On her return she wrote a book, Why Antarctica: a Ross Sea Odyssey, which chronicles the fulfilment of a childhood dream.

“When I told my friends I was finally going to Antarctica, the most common question was: ‘Why Antarctica?’. I didn’t bother replying. You either ‘get’ Antarctica, or you don’t. If you do, there is no need to ask. If you don’t, words could not explain why.

I have been fascinated by the 7th continent since, at the age of eight, I discovered the existence of a place filled with mountains, ice, snow and wild weather; all the things I love.

My first expedition was in 2013, and incorporated a 32-day semi-circumference from the Peninsula to the Ross Sea. A dream come true for an Antarcticophile, getting to step into the historic huts of Shackleton and Scott; walking for hours in the Taylor Dry Valley. I knew one trip would never be enough. I returned in 2016 on an action-packed 12 days, camping in a bivvy bag on the ice; snow-shoeing; kayaking. Then in 2017 I repeated the 32-day semi-circumference.

I am chuffed to say that the ANARE (Australian National Antarctic Research Expeditions) Club commissioned me to write the memoir of Centenarian, John Russell OAM, who still loves telling tales of how he and nine other Aussies were first ashore to set up Mawson Base in 1954.”

Dale produced a companion book of photographs to her first book. I bought mine as an E-book, files tucked away inside the USB body of a cute rubber penguin!

You have to assume there will always be ‘Antarticophiles’ like Dale and John, passionate about visiting and even re-visiting the South. It will be interesting to see what authorities do when visitor numbers inevitably creep towards 100,000.

The Antarctic Southern Oceans Coalition (ASOC) says the number of visitors has been doubling every couple of years, along with the establishment of “mass tourism destinations”.

Paul Ward’s website CoolAntarctica is a trove of information about the frozen continent. We sourced some of the visitor information from this site. Ward notes the ban after 2008-2009 on cruise ships carrying 500 passengers or more. Large cruise ships were spending two or three days in Antarctic waters, often as part of a broader cruise, but not landing.

“These large ships were a great concern as an incident involving an oil or fuel spill from them would have been very significant,” Ward writes.

“Any kind of rescue or evacuation would also have been very difficult, owing to the large numbers of people on board”.

The global pandemic was just emerging as the 2019-2020 tourism season came to an end. The next cruise season, still seven months away, is likely to attract even more visitors to the South, Covid-19 restrictions not withstanding.

The International Association of Antarctica Tour Operators (IAATO) plays a pivotal role in ensuring its members adhere to environmental and safety protocols. Formed in 1991, it requires all members to abide by the Antarctic Treaty. Cruise ships co-ordinate with each other to ensure than no more than 100 people are onshore at a landing site at the same time.

Despite these precautions, there are signs the continent may be at risk of being over-loved. Scientific studies have identified human interaction as one possible cause of sickness in Emperor penguins.

The Science Magazine published an article in 2018 based on research by a team of scientists from Spain. They discovered the effect of reverse zoonosis on bird and animal populations. Reverse zoonosis is the term used to describe humans passing pathogens on to animals.

The study found human-linked pathogens in bird poop, revealing for the first time, that even animals on this isolated, ice-bound landmass can pick up a bug from tourists or visiting scientists.

“This newly identified infection route could have devastating consequences for Antarctic bird colonies, including population collapse and even extinction.”

Regardless, if Antarctica is on your bucket list, a visit in the summer of 2021/22 will depend on how relaxed your country is about letting you leave. Still, we can all dream.