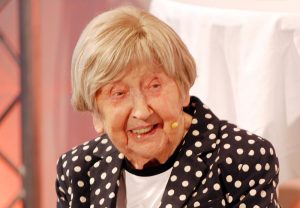 For reasons yet to be linked to Wikipedia, this week I ended up on the home page of a 105-year-old Swedish blogger who goes by the moniker Bojan. I know, it sounds like material for a Nordic noir series. When starting out with the online arts at the age of 100, Bojan starkly rejected comparisons with the ‘100-year-old man who climbed out of the window and disappeared,’ (a popular Swedish novel by Jonas Jonasson).

Bojan’s invariably short pieces reflect on the wonders of daily life that people half her age take for granted. She comments often about the seasons, the weather, old age and being single and alone.

In one recent blog (I found one dated November 5, 2017), Bojan wrote about Swedes who live by themselves. The Google-translate app I suspect renders the English somewhat less fluent than it might be in, say, a Henning Mankell thriller. But you’ll get the drift.

“The other day I read the news that in Stockholm, there are thousands of single-family households, more specifically 380,000 or 40% of the population live by themselves. In the past, there was some suspicion of living alone, but now it is more tolerated. It’s also easier to be single when there are several of them. I myself have been single since 2004 and I think so, of course. It was obviously more enjoyable to be part of a flatness (sic?), but it is pointless to feel sorry for it. Single households are today Sweden’s most common housing form, and nobody thinks it’s something strange. At first, I thought it was pure sorrow to live by myself, but one must get together and live on.”

Bojan started getting together and living on at 100, after buying a computer and teaching herself how to use it. Some of her more recent posts suggest she has become a reluctant ‘cause celebre’ through the conventional media’s fascination with a centenarian who has mastered the online universe. She has done many interviews, appeared on TV chat shows and been the subject of a film, “Life Begins at 100”.

Filmmaker Asa Blanck tracked Dagny Carlsson down and persuaded her to participate in a project which even he admitted was likely to be thwarted by the subject’s death. But no, Dagny turned 105 in May and continues to amuse readers, day by day. (A sequel is planned – the very definition of optimism).

Dagny’s blog is as Blanck found her – “a brusque old lady – all gallows humour”. She promised readers she would not be intentionally nasty but if she ‘trod on toes’, she did not really give a damn, or det kvittar mig, as they say in Sweden. Dagny dreamed of being a teacher when she was young but ended up working as a seamstress. She escaped an abusive first marriage and found love with her second husband, who died when she was in her 90s.

As Blanck observed: “She had managed to rise above her strenuous, grey existence and she had decided she would finally do what she had wanted to do all her life: write.”

Sweden’s blog-readers soon caught up with Bojan’s racey, funny insights and seemingly outrageous behaviour for ‘someone of her age’. For example, she writes about women wearing jeans and how they never did in her day. At 101 she went out and bought a pair of denims.

Ah yes, now I remember how I ended up on Bojan’s blog. I’d been deeply delving into the Wikipedia universe – a free community encyclopedia we writers tend to take for granted. Anyone can contribute, edit or update ‘Wikis’ within Wikipedia. You just need to register as an editor and then be mindful your input will be monitored by a legion of truly vigilant Wikipedia editors. Your input could be as simple as correcting a typo to contributing a new biography of someone you think should have a Wikipedia entry.

One of the things that fascinate me about Wikipedia is the community vigilance which results in entries being updated very quickly. Within hours, it seemed, of the news of Tom Petty’s death, someone had updated his Wikipedia bio, including the premature announcements on social media and the controversy surrounding the timing of Petty’s fatal cardiac arrest.

Wikipedia is essentially a collection of some five million articles in English and another 40 million in 293 languages, all contributed pro-bono by people who care about history, accuracy and detail.

I asked my blogger friend Franky’s Dad if he had ever edited items for Wikipedia. Yes, said FD, a few hundred since 2006. He’d even created a piece about a singer, Bob Wilson. I was momentarily aghast until discovering the latter is a singer, guitarist and songwriter from Pleasant Valley California. Franky’s Dad, aka Lyn Nuttall, maintains a music trivia website www.poparchives.com.au, which aims to find out ‘Where Did They get That Song?’

FD reckons editing Wikipedia is one thing but creating a new entry can be hard yacka, what with their exacting standards for formatting and referencing.

The Listener’s technology correspondent Peter Griffin confessed he was a Wikipedia ‘freeloader’ until deciding to attend an edit-a-thon in Wellington. Events like this were attended by 70,000 people worldwide last year. The main idea is to pick a neglected subject and add to the body of work. There is also a push to correct what is seen as a gender imbalance. Griffin was not confident until encouraged by a veteran Wikipedia editor to “get stuck in and break things”.

The key intention is to keep it factual – not easy in the Trumpian world of fake news and flat-out fabrication. Griffin’s group were on safe enough ground, however, collating biographies of female scientists.

“The seasoned editors smiled knowingly as we fumbled along,” Griffin wrote in The Listener’s September 16 print edition.

“But after a full day, we’d created about 20 biographies of women in science and extensively edited 30 more.

“I’d like to think we increased the sum total of the world’s knowledge.”

Even famous racehorses have a Wikipedia entry. Australian racing’s latest super-horse, Winx, has won 22 races in succession, amassing more than $7 million in prizemoney for her owners. A few weeks back she won the country’s premier race (The Cox Plate), for the third time. No such profile for Regal Monarch, a racehorse with just four wins to its name, put down after falling in race four on Melbourne Cup day.

You’d think tragedies like this (remember Dulcify, 1979), would prompt connections to retire Winx to lush green pastures and make another fortune at stud. But there is an ambitious program in 2018 to race the mare again in Australia and against the best in Europe.

There was even talk she might contest the Emirates Stakes in Melbourne this weekend. But trainers know. Chris Waller last week said Winx would go to the spelling paddock. At least someone other than me could see that Humidor’s fast-finishing second in the Cox Plate did her in.

As Peter Griffin found at the edit-a-thon, only facts are allowed in Wikipedia, and each fact must be backed by a rigorous reference. So seriously is this edict taken, editors this year banned the UK Daily Mail as a source, citing poor fact checking, sensationalism and fabrication.

So I guess I’ll keep my opinions about Winx to myself, then.