Home Friday on My Mind Surfing the gender vote 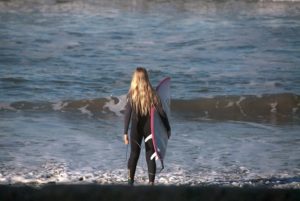 So we’re walking along the beach, me feeling over-dressed in board shorts, t-shirt, socks and joggers (to protect a bruised toe). We passed a group of more appropriately beach-clad women and girls (though one wore a wet suit), taking surfing lessons from a sun-worn guy in his 30s. Not that I ever surfed, but it seems to me that in the 1960s, surfing was something boys did while the girls sat on the beach, admiring their boyfriends and guarding personal items.

Later, She Who Always Wears Sunscreen came out of the change rooms wearing shorts and a bra.

“Seems I left my t-shirt on the beach,” she mused. “And I don’t feel like going back to get it.”

It says a bit about feminism in 2016 that a woman can feel OK about going around in public in a bra, however temporarily.

“It covers considerably more of me than some of the women I’ve seen on the beach,” she rightly observed.

Despite statistics that suggest women make up only 15% of the surfing cohort, the sport is rising in popularity among the under-20s. There’s lots of research about this, though you need to get behind click bait articles like “Top 20 Hottest Girl Surfers” to find there has always been a determined posse of women who wanted to surf waves – since the 1920s even.

Yet Cori Schumacher, writing in The Guardian, contends that despite female pro surfers pushing the standards ever higher, they still have to compete with a double standard that demands they define their femininity within ‘a male sexual economy’.

In 1976, the first year pro women surfers were paid, 20% of prize money was allocated to women. In 2011, when Schumacher wrote this, 22% of the total prize purse went to female surfers.

The ‘babes in bikinis’ gender caricature aside, there are plenty of strong female role models listed in Surfer Today.

In politics, as in surfing, one not ought to confuse a woman’s right to compete with an assumption that being female equals feminist ideals and/or leftie politics.

There have been more than enough female world leaders to suggest that they are just as likely to lean to the right as the left of politics.

It is now known that 42% of women voted for Donald Trump in last week’s shock election result. The New York Times noted that 70% of those participating in an exit poll said they thought Trump’s behaviour toward women was ‘a problem’, yet 30% of people who said that voted for him anyway.

One can hardly rely upon US election statistics to define social trends when 46% of Americans did not vote at all.

The Atlantic tried to set the record straight about gender voting in the US, maintaining that 54% of women voted for Hillary Clinton and 42% for Donald Trump (it also means 4% voted for someone else, but let’s not muddy the waters).

Exit-poll data indicated that 94% of black women and 68% of Hispanic women voted for Clinton, The Atlantic reported a few days ago.

The article cited Kelly Dittmar from the Center for American Women and Politics at Rutgers University: “If only women voted in this election (and no one else), Clinton would have won.”

That kind of wishful thinking aside, the more relevant number is that roughly 100 million eligible people (approximately 48% of whom are women), did not vote. Many journalists opined that those who did not vote were lazy or apathetic.

Yet the Pew Institute’s research on non-voters said only 2% cited ‘laziness’ as an excuse, the same proportion of those who said they could not vote because they were in jail or on parole.

The five main reasons for not voting were:

Forbes Magazine recently published a list of the world’s most powerful women, currently headed by Germany’s Chancellor Angela Merkel and Federal Reserve chair Janet Yellen. After November 8, 2016, Hillary Clinton may be off the list altogether.

One might also expect First Lady Michelle Obama to drop off this list too, although she has plenty of support to have a crack at the top job.

A FOMM reader greeted me at the markets one day, suggesting as a future topic the humble bicycle’s role in gender relations, circa 1890. Simply put, the bicycle allowed Victoria-era women freedom of movement; moreover, the practicalities of riding a bike dressed in hoop skirt and girdle led to less cumbersome garments and, ahem, greater freedom of movement. David Hendrick remarked upon this in a paper for the University of Virginia, noting that the advent of the bicycle gave Victorian women autonomy and a way of leaving the house without relying on men for travel. He agreed with women’s rights advocate Susan B Anthony that the bicycle had “done more to emancipate women that anything else in the world”.

This was a good 30 years before the first Wahine took a long board out beyond the breakers, but perhaps you’ll see my point.

Cori Schumacher, an openly gay, world-ranked surfer, says she grew up surfing in California in the 1980s and 1990s, but very few women surfed in the earliest days of her youth.

Surfing was then described as a ‘male-dominated’ activity, but even with the growing population of female surfers, there has not been a corresponding increase in representation or equal pay.

Schumacher said “…rather than surfing being merely male-dominated, it is also a farm for masculinity and androcentrism.”

No doubt someone is running a book right now on the prospect of an androcentric Trump presidency appointing any women (apart from the third first lady, if you get my meaning), to a position of influence.

As if that were not enough, FOMM’s online surfing also uncovered three new words: androcentrism (placing the male human being at the centre of one’s world view), Wahine (female surfer) and Awk! (old school cry of alarm or excitement – e.g., spotted an excellent wave).