Home automation Self-service gets our enterprise for a bargain

Self-service gets our enterprise for a bargain 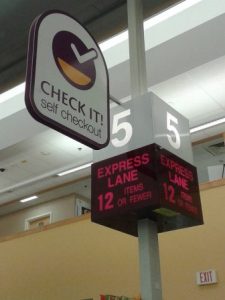 You may call me a peevish old man, but these self-service supermarket checkouts give me the pip. I only encounter them when venturing out of the village, as our service-oriented IGA does not as yet have automated check-outs.

Not so a certain Brisbane supermarket which, around 5pm, seems to have nobody staffing its numerous checkouts and only one person ‘helping’ people scan their own groceries. I usually ignore the self-service corner and will wait an inordinate time to be served by a human being. Last time I was in the 12 items or less line at the same supermarket, the poor woman was switching back and forth between checkout customers and those at the cigarette counter.

Management textbooks would tell you this is successful multi-tasking and making efficient use of a staff member over what is probably a meal break. Decency would say put two people on at this location.

American Facebook page Union Thugs has a bit of a campaign going against self-service, observing that the machines (a) they kill jobs (b) they do not contribute to payroll tax and (c) they are really not that convenient.

The latter was certainly true when I returned from shopping in the city a few weeks back to find I’d charged myself twice for the same item. So back I went, burning more fossil fuel, to queue up at the lightly staffed counter where one person was multi-tasking between selling cigarettes and dealing with complaints like mine.

IGA Maleny director Rob Outridge knows the downsides of self-service checkouts but can see a time when he may be forced to introduce them. Supermarkets operate on skinny margins and the biggest fixed cost is wages, which keep on rising. So while Maleny IGA still exclusively hires people to serve at the checkouts, there may be a time when competition and the bottom line force his hand.

“The problem is your labour costs keep going up and there is no increase in productivity.”

I suspect Rob Outridge knew I was going to take a Bolshevik approach to the subject of automation doing people out of jobs. Nevertheless, he handed me his card and in that pleasant, management-by-walking-around way of his said: “Just let me know if you have any other questions.”

It’s not just that a machine replaces a worker. You (the customer) are doing the checkout job yourself – for nothing. Of course it does not stop there; we do the job of a retail employee at the ATM, the fuel pump, at toll points and just about anything someone would help you with offline is now done (by you) online.

The online world has transformed the way businesses interact with customers. In the online world there are myriad stories of businesses getting our enterprise for a bargain, as they con us into signing up for electronic bus and train cards, gadgets on your windshield which go ‘ping’ when you pass through the toll gates and so on. Last time I parked under the Brisbane Convention and Exhibition and Centre, I had to go to a machine and pay for the parking then pop it in the slot at the boom gate. There were no attendants to be seen.

It hardly seems like nine years since the toll booths closed on the Gateway Bridge and Logan Motorway. There was something refreshing about that brief interaction when you paused at the collection point and tossed your coins into the tub. When the electronic toll system Go Via was introduced in 2009, 100 toll collectors were made redundant, with 22 moving into management jobs within Go Via. Former toll collector Sharmaine Phelan told the Brisbane Times she had a tear in her eye on the last day.

“Over the years I have been here I’ve met some lovely people, some that I’ve kept in touch with who have come through the toll.”

Tolls were collected manually on the Gateway Bridge for 23 years. As a motorist, you always had to be sure to have a pile of coins ready in the console, but that was all you needed. Today, you need a beeping gadget on your windshield and an online account that has to be kept topped up or you will get a letter in the post demanding payment. Along the way, a system of debt-collecting was invented to deal with people who either didn’t have a bleeping thing on their windshield or kept forgetting to top up their account. If they are people who also ignore mail and such, then eventually the Department of Transport gets involved and pings you for non-payment of tolls.

How is that an improvement on making Sharmaine Phelan’s day, then?

Fuel stations have been exploiting their customers in this fashion for decades. Self-service fuel stations began to spread in the US and Australia in the 1970s, although at a faster rate in America. Mind you, there is still one state (New Jersey) that refuses to allow customers to pump their own gas.

Australia caught on to automated fuel service in the 1970s and the reach has been pervasive. Even in the remote outback you have to pump your own fuel and, between the hours of 9pm and 5am, you often have to go in and pay for it first. One of the downsides of self-service fuel (from the fuel retail owner’s perspective), is the minority of motorists who fill up and just drive away.

Imagine my surprise earlier this year when driving into Longreach (at night) in an urgent search for a fuel station. The only place open was not actually open but had a bowser where you could use your credit card to (a) enter how much fuel you wanted and (b) press the Pay Now button.

You might remember the rockabilly song Harold’s Super Service made popular by Merle Haggard in 1970. I suspect the writer (Bobby Wayne) was perhaps taking a dig at the about to be modernised industry with his song, in which the owner of an old Model A drives in to Harold’s Super Service and insists on getting his money’s worth.

“Gimme 50 cents worth of regular (pronounced ‘reglar’)
Check my oil too if you don’t mind.
Put some air in my tires won’t you mister,
Clean my windows too if you have time”

The National Advanced Convenience and Fuel Retailing magazine (NACS) explains how automation gained the upper hand in the US. In 1969, self-service gasoline accounted for only 16% of sales in the US. By 1982, 72% of gas sold in the US was self-service and it had climbed to 90% by 2011.

I was amazed to find, amidst the proliferating supermarket-owned and franchise outlets, that there are still a handful of petrol stations in Australia offering old-fashioned driveway service. You’ll have to read Mandy Turner’s article to find out where they are, though.

Maybe it’s just that I’m approaching a certain age, but I secretly yearn for that era when the petrol station attendant filled your tank, checked your oil and washed the windscreen at the same time – just like the song.