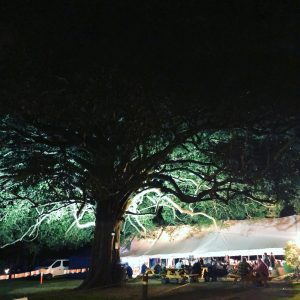 Some of our musician friends in Melbourne and Sydney have ‘festival envy’, akin to the mixed emotions felt by southern footie fans who will miss out on this year’s grand finals.

As you might know, the National Rugby League (NRL) moved all teams across the border into Queensland. As a result of ongoing Covid lockdowns in Victoria and New South Wales, this year’s Grand Final will be held in Brisbane for the first time ever. Likewise, the Aussie Rules Grand Final has been moved from Melbourne to Western Australia.

As for those southern musicians, most if not all of their live music events have been cancelled or postponed. For people who combine day jobs (also affected by lockdowns), with weekend gigs, these are very hard times. It’s been harder still for those who do earn a living from music and persevere with touring plans and CD launches, only to see them curtailed by lockdowns.

So we can consider ourselves blessed to have performed at one of the few music festivals to go ahead in Australia last weekend at Neurum Creek bush retreat near Woodford (see image above).

The Neurum Creek Music Festival is in its 15th year, not counting a cancellation in 2020. It’s a medium-sized festival held outdoors (a camping weekend). The organisers hire one very large marquee with associated infrastructure for a bar and a ‘green room’ for performers. It is a minimalist event – numbers are capped at 1,000 and most of the work is done by volunteers. There were three food stalls this year and a hugely popular coffee van. The festival is billed as an ‘acoustic music’ festival,(ie no heavy drum kits or electronica, thankfully. Ed) with 23 acts performing from Friday evening through to Sunday afternoon.

Organisers Angela Kitzelman and Don Jarmey kept a daily watch on Covid developments in Queensland while planning the 2021 event.

“We sat down and assessed the risk.” Angela said. “It’s a very relaxed festival that we run and the money that we spend on it goes mainly to performers, for the marquee costs and the sound guys.

“It was looking at how much we spend and also looking at the situation in Queensland and what the health directions were.

“At the time we decided to go ahead with it, there had been a lockdown. We came out and talked to the camp site managers. They told us that in the event of a Covid lockdown cancellation, people who had booked tickets could get a full credit to do it at another time.

“We realised we could afford to do this at half capacity, as it was at the time, and be very clear that we would pick (the festival) up and put it on another date if something happened.”

After looking carefully at their finances, the organisers decided to press the ‘go’ button, without the usual lead time to host music festivals.

“We invite people to play and say this is how much we can afford to pay.

“We didn’t have enough time to invite expressions of interest so we just asked people who had played here before, abiding by our rule that performers don’t get to play two years in a row.”

“Our advantage is that people come for the festival itself. We don’t have headline performers. We often sell out before I’ve finished finalising the programme. People come here for the experience.”

While Queensland has been able to avoid ongoing lockdowns, some music festivals have been cancelled or postponed regardless. Last month, Woodfordia announced the cancellation of its six-day Woodford Folk Festival, held at New Year. Instead, the organisation will schedule smaller events called Bushtime.

The Byron Bay Blues Festival, which was cancelled just one day out from the Easter 2021 programme, has been postponed again to April 2022. The National Folk Festival, held in Canberra at Easter, has called for expressions of interest for 2022, a move which surprised many, as it was cancelled in 2020 and 2021.

Illawarra Folk Festival artistic director David De Santi took to Facebook this week to announce the cancellation of the music festival set down for 13-16 January, 2022.

“It is just too hard in the current climate for a non-profit association to take the risk on a festival of the scale of the Illawarra Folk Festival,” he said.

Mr De Santi said there was a chance the festival may be able to apply for a grant from the Federal Government’s RISE Fund and reschedule later in 2022.

Despite these and many other cancellations, two smaller music festivals are going ahead in north Queensland next month. Smaller social gatherings where musicians gather to jam have been held or are set down for later in the year. Woodfordia is also staging its Small Halls tour around Queensland country areas.

Professional arts groups including theatre, ballet, opera and orchestral companies have also suffered from lockdowns and Covid restrictions. Some Queensland arts events have since gone ahead, including ballet, theatre, musicals and the Brisbane Festival. Even so, this press release from Queensland Ballet is just one example of how arts companies have struggled to stage shows since Covid started in March 2020.

Queensland Ballet artistic director Li Cunxin took the decision in May 2020 to postpone the season to 2021. Despite forecasting a 43% drop in revenue for 2020 and a drop in patronage for 2021, Queensland Ballet resumed performances in 2021. As subscribers, we were lucky to have seats for sold out performances of the 60th Anniversary Gala in March and Sleeping Beauty in June. The company also toured the regions (Tutus on Tour). and has five more ballets scheduled between now and the end of the year.

Government funding is available to support the arts, but it is relatively lean compared to the money invested in professional sport. The Federal Government’s $50 million Arts Sustainability Fund might sound generous, but it is spread over two financial years (about $2m a month). Then there is the hard-to-fathom RISE grant program. This post in The Conversation last September tosses it into the too-little-too-late basket.

For the professional sports sector, it has been mostly ‘business as usual’, although at a considerable financial cost. The NRL decided in early July to move NSW and ACT-based rugby league teams and staff into Queensland at a reported cost of $12m to $15m per month. The NRL funded the move, but it needed formal State Government permission to make it work.

As usual, money talks. It comes down to billion of dollars in sponsorship deals, international broadcast rights, betting agencies and other contractual obligations (not the least of which involves players’ salaries).

The NRL decided to relocate when there were eights weeks of the competition left to run (not including the finals). Now, primarily because of the Covid situation in NSW, the finals are being held in Queensland as well. So by the time the NRL wraps up the season in early October, the cost of what was meant to be a month-long trial may have blown out to $45 million or more.

The good news for Queensland is that local hospitality businesses have benefited from this, with more than 500 people living in hotels and serviced apartments for three months.

The hospitality flows most on ‘Mad Monday’, when players who did not make the finals let their mullets down. Let’s hope that the relatively strong Covid bubble around these 13 visiting teams remains unbreached during coming weeks.

We only need to remember the infamous Illawarra Dragons barbecue debacle to realise what could happen amid the inevitable celebrations and drowning of sorrows that follow a grand final.