Little boxes – the genre-fication of music 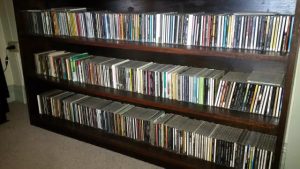 Yes I know it’s my fault, but early in the days of turning my music into online MP3s, I accidently chose Christian Rap as a genre for one of my songs. The song I incorrectly categorised is called 53 & Fragile, about a fellow taking stress leave to ponder his future. I guess you could rap to it, in a God-less sort of way. It only took three years to discover this error.

There are many reasons why the recorded music business is in a state of flux but I continue to believe (and I’m not alone), that the industry’s insistence on streaming music into little boxes called genres has robbed many a musician of potential fans.

As Sydney Morning Herald reviewer Bernard Zuel said of a Luke O’Shea album – it is put into a box labelled Country and as a result, a great many people will never open that box. This is likely to be the case, despite someone with Zuel’s acumen identifying all manner of pop, rock and hip hop influences in O’Shea’s music.

When we released our CD, The Last Waterhole, in 2015, it was our first real engagement with online music. After labouring through the online applications (and printing out paper copies), our music was magically turned into MP3s (compressed audio files), and made available for download on CD Baby and subsequently ITunes, Amazon Music, Google Music and more.

We sold the expected number of CDs, but three years later our album has drifted out to sea as thousands of new releases come in with every second wave. Online sales are about as sporadic as our public appearances.

The indie market is cluttered with home-made CDs recorded on a laptop and flogged at markets for $10. Those with loftier ambitions engage a producer and typically spend $6,000 to $10,000, which is all very well if you can sell 500 copies at $20 each. At the high end of the game, production companies spend up to $100,000 on a CD that will jump out of the radio like a rabbit on steroids. But over a long span of time, I suspect, the listening public’s ears are getting tired of it all. There’s way too much of it, no quality control and the harsh, metallic attack of compressed digital music has taken the edge off the listening pleasure.

And, as our producer predicted, the day is coming when people won’t need to own CDs anymore – all they‘ll need is a Bluetooth speaker.

“OK, here’s the YouTube channel for the DJ Goodwill.”

The science is imperfect, but it seems to be enough for an alarmingly large group of people, who can buy an OK-quality music-streaming speaker for a few hundred dollars. The latest research estimates the value of the global portable Bluetooth speaker market at over US$4 billion, expected to double by the end of 2025.

A few years back the grand dame of folk and blues Margret RoadKnight posted an article on Facebook from Digital Music News with the droll comment “Why I’m up for House/’Salon’ concerts!!”

The article outlined the industry’s 99 (main) problems, the key one being that musicians and artists are finding it harder to “monetize” what they do, whether performing or selling merchandise.

People have got used to free stuff and now they won’t pay unless they are very drunk and you’re giving away a t-shirt or stubby holder as well.

I asked a 20-something lad why he thought nothing of shelling out $20 for a pizza but he was reluctant to pay $20 for an album.

“Yeh, but I know what a meat lovers’ pizza is like, right? And I get garlic bread.”

“But you only get to eat the pizza once,” I reasoned. “You can play a CD over and over. A pizza won’t make you think about social issues.”

The Digital Music News article by Paul Resnikoff identifies issues with the method of delivering music. Streaming (subscription services which offer consumers a wide variety of music to listen to in-house but not download), continues to explode, but not enough to compensate for declines in physical CD sales and paid downloads.

We chose not to take up the offer to have our music on Spotify, a subscription streaming service, which in hindsight seems to have been a counter-productive decision. A musician friend Sarah Calderwood recently asked if we were on Spotify as she was compiling a playlist of Australian indie folk music which she planned to put on ‘repeat’.

If you have a Spotify account you can listen to Sarah’s playlist, which includes acts like Gone Molly, The Barleyshakes, Michael Fix, Women in Docs and Mark Cryle.

The independent musician, defined as a musician without financial backing, has to constantly find fresh ways of reaching new ears.

There’s a lot of indie musos around, competing with each other for gigs and CD sales. Increasingly they busk, or play for nothing at ‘walk-up’ venues which ask people to put their name on a blackboard and sing two or three songs. The artist might sell one or two CDs (if he or she is really good at making an impact and the song is up to the task). The alternative is a paid gig playing in a bar or restaurant where people go to eat, drink and talk.

Resnikoff writes that the key issue is that most consumers attribute very little value to the recording itself. They already heard the song on Spotify Soundcloud, Reverbnation, Bandcamp or YouTube.

The fractions of cents paid for streaming plays might add up to dollars eventually, but you need to keep selling ‘merch’ across all platforms.

From a financial point of view, it matters little to me that there are boxes of CDs in the hall cupboard, even if the ego grapples with the notion of relevancy.

It is a different story for people in their 20s and 30s who have decided to make music a full-time career. This involves constant touring, online management of their business and profile and (the thing nobody talks about), singing the same 10 or 12 songs every night, over and over. If you’re going for it, you have to keep churning out new material (thus consigning your older material to the remainder bin).

As one musician told me, “You have to keep putting new stuff out, even when you know it won’t pay for itself, otherwise you get forgotten about.”

House concerts, and we are long-term supporters, are a sure-fire way of giving musicians a listening audience. Even if only 20 people show up, it’s a better result financially and aesthetically than a rowdy Friday night pub gig. Audiences love the intimacy and the musical and lyrical nuances that are often lost in noisy, amplified venues. We’re hosting our 110th house concert on June 10: check it out at

And the homemade afternoon tea on offer is guaranteed to be yummier than a meat lovers’ pizza and garlic bread.

Further reading: How Music Got Free, by Stephen Witt.