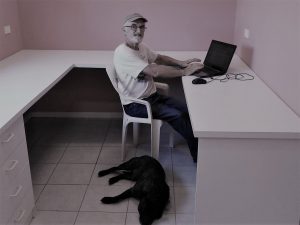 It’s the lead news story you’d probably never see on prime time TV, a focus on depression and anxiety and how Covid-19 and the control response has seen more of us succumb to the Black Dog.

Newsreader: “Researchers have published new data that show the incidence of depression and anxiety among travellers stranded in Queensland has soared in recent months.

“70% of those who reported acute anxiety or depression over the past six months were people from New South Wales and Victoria who find themselves exiled in Queensland.”

Interviewer: Julianna and husband Dario* have been stranded in Queensland since a road trip north in June turned into five months in exile. Our correspondent caught up with them at Sapphire, after the couple had spent a fruitless week fossicking for opals.

Julianna: “It was fun until it wasn’t fun. I mean, how many times can you go to the Qantas Museum? I miss my grandkids and I miss Victoria, the markets and all the good foods you can’t buy in outback Queensland.

Dario: “Yeh, Julianna’s right  And, you know, a 20-foot caravan might seem big until you have to live in it for months on end. It always smells like fried eggs.”

Interviewer: So you have both slipped into a state of anxiety and depression as a result of not being able to go home?

Julianna: “Yeh, well it’s not logical – I mean the sun’s shining and the birds are singing and every day we feel safe because there’s hardly any cases in Queensland. But I’ve been feeling increasingly sad and apathetic.”

Dario: “And I’ve been drinking more than I usually do…

Satire it may be, but it’s no laughing matter, this dark mood which can inexplicably darken the sunniest Queensland day. The symptoms are not hard to read: feeling tired all the time, not going out much, feeling miserable, feeling that nothing good ever happens, relying on alcohol…

Sunday is World Mental Health Day, although why we only get one day a year is something to ponder.

Multiple studies have been carried out that link the increased incidence of anxiety and depression to the global pandemic and the response by authorities to control the virus.

Professor Richard Bryant from UNSW’s School of Psychology says people find it harder to cope as time goes by.

“We are having a longer and later lockdown experience than the rest of the world, due to the lack of people who are vaccinated and the Delta strain of COVID.

“What we tend to see is that people get anxious at the start, then when the effects of social isolation wear on, it becomes a depressive reaction: people’s coping resources get eroded over time.”

Prof Bryant said the Delta strain and the effect of younger people dying has elevated anxieties among that cohort because they thought COVID was mainly a risk for older persons.(Apparently not taking into account the possibility of their catching Covid and passing it on to older people, such as their parents. Ed)

He says we can learn about the trajectories of mental health in Australia by looking at countries that are somewhat ahead of us.

“For example, one study in the UK sampled people at varying points during the pandemic. This study found that two months into lockdown, which is approximately where much of Australia is positioned now, the rate of people’s anxiety had decreased marginally relative to earlier periods during the pandemic.

However, at that stage more than half of the people participating in the study were still reporting anxiety.”

Three months after lockdowns started in the UK and restrictions were beginning to ease, half of the respondents still reported being worried about the pandemic.

As always, those most vulnerable to mental health problems were young adults, the unemployed, single parents, and people with long-term health conditions.

A recent webinar hosted by Monash Business School explored the impact that deteriorating mental health is having on the Australian economy (estimated at between $40 million and $70 million a year). Covid-19 has driven a rise in the prevalence of depression and anxiety disorders, and is linked to an overall decline in women’s mental health.

Professor Jayashri Kulkami,  Head of the Department of Psychiatry at Monash Central Clinical School, uncovered some striking findings from an online survey conducted by her research team looking at ‘Women, COVID-19 and Isolation’.

Professor Jayashri points out that the concept of quarantine is not new, and that isolation is intended to keep people safe. Paradoxically,  for some women and children, being isolated at home is doing the opposite.

“The negative consequences include the risk of losing jobs, greater economic vulnerabilities, and psychological health issues resulting from isolation, loneliness and uncertainty.”

Statistics collated by Beyond Blue, one of the many support services people can turn to, show that:

Fortunately, support-seeking appears to be growing at a rapid rate, with around half of all people with a condition now getting treatment.

Against those long-term stats, an Australian Bureau of Statistics survey published in July found that one in five Australians are reporting high or very high levels of psychological distress linked to the COVID-19 pandemic.

The New Daily’s John Elder set out to find the hidden silver lining beneath this gloomy diagnosis. He examined a survey of 3,000 people by psychologists from the University of Strathclyde in Glasgow.

The May 2020 survey found that more than half reported positive changes in their lives since COVID-19 took hold. In particular, 87% of people were more appreciative of things usually taken for granted. Respondents reported having more time to do enjoyable things, spend more time in nature, pay more attention to personal health and pursue physical activities. (Our garden has never looked so good. Ed)

These changes in behaviour were still in train for half the participants who had reported positive effects.

A December 2020 study from the University of Sydney found that 70% of its 1,000 participants experienced at least one positive effect of the pandemic.

“The top three positive effects were having the opportunity to spend more time with family; having greater flexibility in working arrangements; and appreciating having a less busy life.”

The University of Bath and the University of Lisbon surveyed mothers with one or two children (in the UK and Portugal). Many of them were working at home on reduced wages, while 93% of their children were learning from home via remote learning.

“Nearly 90% of the women found that the hardships caused by the pandemic had provided valuable opportunities. More time with the family, rediscovering small pleasures – but also time to think about their one and only life, and its meaning.”

As Elder found, and you don’t know until you go looking, the Covid pandemic has been responsible for “post-traumatic growth”. This is a formal label for what happens when people undergo a transformation after suffering adversity.

“Many people say they have found meaning in their lives – or at least have begin to ponder more deeply about these big questions that are answered more by feeling, than thinking.”

Things to ponder on Sunday, when we reflect on the 300 million people who struggle with or just simply live with depression.

As we often say around here, when the sun is shining and the birds are singing, “Well, at least we don’t live in Afghanistan.”

*not their real names