Country of origin labelling under review 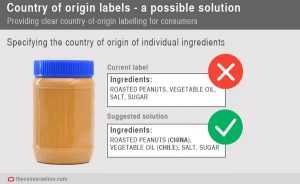 Image: An example of what some might like to see in revised country of origin labelling: source The Conversation

I discovered only in the last year or so that up to 70% of ham and bacon sold in Australia is imported from Europe or the US. Your regular supermarket no doubt helps out by labelling pork products so you know what you are buying.

For example, ham off the bone is almost always produced in Australia. Cheaper cuts and processed ham and smallgoods may contain up to 70% of imported pork. Australian Pork Limited recently found that 10% of shoppers admitted they failed to check or were unaware of country-of-origin labelling.The survey was carried out to support an awareness campaign in South Australia.

“Consumers should check the bar chart on the country-of-origin label, located under the green and gold kangaroo. The bar chart must be almost full or have a percentage of at least 90% Australian ingredients, to guarantee the pork is Australian.” Australian Pork Limited is one of many organisations which has made submissions to a review in 2020 of the country of origin labelling regime. The Department of Industry, Science, Energy and Resources was aiming to complete its report by July 2021, but so far it has not been publicly released.

Labelling laws were introduced in July 2018, after a furore surrounding a case in 2015 where consumers contracted Hepatitis A from frozen berries imported from China and Chile.

Country of origin (CoOL) labelling requires the food product to contain a label with information stating the percentage (by weight) which is (or is not) Australian made.

Consumer organisation Choice, which campaigned for CoOL labelling as early as 2015, also made a submission to the review, voicing concerns aired by subscribers.

Other improvements sought by those lobbying the department are to extend labelling to ‘non-priority foods’ which includes biscuits and snack food, confectionery, energy drinks, soft drinks, tea and coffee and bottled water. As you might expect, almost all of the 20,000 Choice subscribers surveyed for this submission said that knowing where the food and drink they buy comes from is important.

More than 90% of respondents use country of origin labelling to make decisions when buying food at the supermarket. About half said they use the labels “frequently” and 40% use it “every time”.

The CoOL scheme is administered by the Australian Consumer and Competition Commission (ACCC).

When you delve into this topic a little, it does not take long to find that imported foods take up a lot of shelf space in our supermarkets. This is particularly so for the Indian and Asian food shelves and the pasta and sauces section.

For example, when you wheel the trolley (with two wheels veering in opposite directions) into the fish aisle, here’s your dilemma.

Australia dropped out of the canned tuna business a decade ago, finding it too hard to compete with product from South East Asian countries. Countries like Thailand, where most of our canned tuna comes from, have geographical advantages over Australia and a low-cost processing and production chain.

As for canned salmon, sardines and the like, we go top shelf. We may have fallen for the advertising (bears fishing for salmon in fast-flowing Canadian rivers), but we figure the only difference between the pink or red salmon consumed in the wild by bears is that ours comes in a can (and our feet don’t get wet).

According to the Department of Agriculture, 70% of edible fish consumed in Australia is imported from Asia or New Zealand. This may sound arse-about, but Australia exports about half of its annual fisheries and aquaculture production by value ($1.5 billion in 2019-2020). A report by ABARES describes our export trade as “specialising in high unit value products for the growing Asian market”.

“Australia’s reputation as a reliable and high-quality supplier of high unit value fisheries products, and its proximity to Asia’s fast-growing seafood market, generally insulates Australia’s trade in fisheries products from longer-term shocks. The pandemic has caused some disruption to Australia’s usual trade, particularly for products that are highly export oriented, such as rock lobster and abalone.”

The Buy Australian Made campaign has its adherents, most subscribing to the philosophy that it creates and sustains local jobs. A friend became quite incensed recently on discovering that the can of evaporated milk she had bought was imported from Mexico. Irate, she rang the parent company to complain.

She has a point, when you consider that condensed milk is just  dairy milk with the water removed and sugar added.

It wasn’t too hard to find out that we did indeed make both evaporated and condensed milk at a factory in Victoria. The owner, Nestle, announced the phased closure of the factory in August 2019, with the loss of 106 jobs.

General Manager Andrew McIver, reflecting on the decision to close and move production to Nestle’s overseas factories, said: “People just don’t buy tinned milk like they used to, and cheaper imports have eroded our business further.”

Should we really care too much about where food comes from? Some years ago, I bought a packet of frozen peas from a supermarket, not even looking or thinking about country origin. I got the bag home and read “Produce of Poland” on the label. Then I checked the map and found that Poland is just 709 kms from Chernobyl, the site of a nuclear plant meltdown in 1986.

Said packet of peas came in handy when I injured my knee (against the corner of my desk), but eventually I threw it away.

There have been enough high profile incidents of food recalls over the years to raise our levels of awareness about the risk of contamination.

Food Standards Australia and New Zealand (FSANZ) says that food recalls averaged 76 a year between 2011 and 2020. While we are all aware of cases where recalled food was contaminated by salmonella, listeria and e coli, these are in the minority.

Almost half of the recalls in 2020 were foods with ‘undeclared allergens’ (e.g. milk, eggs, peanut). Of these recalls, just over half were imported food products. Anyone can sign up to FSANZ to receive food recall alerts

Should you be unfortunate enough to buy a recalled food products before it it removed from the shelf, the advice is to return it to the retailer for a full refund.

Or, like the peas from Poland, you could just chuck it out.