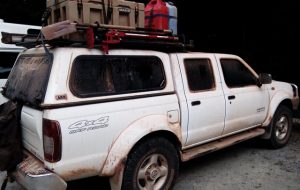 No 5 in an outback series

On the last day of Queensland’s school holidays, a steady line of dusty 4WD’s returning from Cape York are queuing up for the Daintree River ferry crossing. Many of these road-beaten vehicles are rentals from Cairns. You can tell the real deal 4WD by the snorkel (a vertical exhaust above the cabin – designed for crossing creek and rivers without killing the engine).

Kids or even adults have written epitaphs on the dusty windows including “Cape York or bust” “Been there done that” and “still driving”.

The bitumen road peters out just past Cape Tribulation in the Daintree rainforest. Intrepid travellers with appropriate vehicles can take the scenic Bloomfield track to Cooktown then loop back along a sealed road to Lakeland, where the 582 kms journey to Weipa begins. After Weipa, the route becomes a 4WD dirt road with a few sealed sections, all up 908.4 kms, a 28 hour drive to the northernmost tip of Australia. Last time a survey was done, between 60,000 and 70,000 people had made the arduous trek every year. Those are small numbers compared to the volume of tourists visiting Uluru or Kakadu National Park, but in the context of a wild, undeveloped frontier, it’s a lot of traffic.

Some take organised 4WD tours, some fly/drive; others take a boat to Cape York and come back by road. If you do decide to drive from Lakeland, you have an estimated 15 and a half hour journey to Weipa (averaging 37 kmh). By contrast, the bitumen road from Cairns to Lakeland is a three hour drive (250 kms).

You might know that our outback travelling is constrained by the limitations of a six-cylinder rear-wheel drive vehicle and a 30 year old caravan. It’s a high-set van, but as recent journeys on unsealed roads have shown, the suspension is not built for corrugations. We call the 271 kms short cut from Hughenden to The Lynd, which has sealed sections and some rough stretches, ‘The Road that Broke the Wardrobe Door’.

So our adventures north of Cairns were limited to a day trip from Newell Beach to Cape Tribulation and back, via a cruise on the Daintree River, two hikes in the rainforest and the extreme disappointment that arose from listening to the Broncos getting thrashed by the Warriors (well may you scoff and say, ‘what’s that about being in the moment’?). 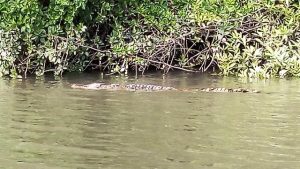 Despite the high tide, we saw three crocodiles on the (highly recommended) one-hour Solar Whisper cruise, including a 3m croc known as Scooter who decided to swim along the mangrove-lined bank a few metres from the boat. John the skipper pointed out a few birds including an Azure Kingfisher, a Papuan Frogmouth, a Rufous Night Heron and Radjah Shelducks. (There are photos on my camera, but the downloading process is rather primitive. Ed)

As for Cape York or bust, I can only repeat what authorities will tell you: take extra fuel, water, tyres, vehicle spares, a jack or two and a shovel. Always give way to wildlife. Note to those who are tempted: there is no mobile reception in much of the Cape region and satellite phones do not always work.

Nevertheless, Cape York or bust is a major bucket list item for the intrepid traveller; some ride trail bikes, others mountain bikes and more than a few walk the track, carrying their food and shelter on their backs.

Tourism is just one part of the Cape York story, a tussle between pro-development lobbyists (remember the Spaceport?), the mining industry, pastoralists, the traditional owners and increasing awareness that this pristine wilderness has to be protected for all time.

Even on the relatively tame Mossman to Daintree road there are decisions for the risk-averse. We don’t often take guided tours, but when it comes to croc-spotting (that’s Scooter on the left) on the Daintree River, go with an expert. I told our skipper about Paddy McHugh’s chilling song, Dan O’Halloran. He’d not heard of it, but I said he should look it up but maybe not share with his passengers. Not to spoil a good story song, I’ll just give you the chorus line: “Nobody knows what happened to Dan O’Halloran except me, and it makes me shiver”.

As we drove back along the narrow, winding but sealed road from Cape Tribulation, I wondered if (in the future) I had a Cape York or bust trip in me, and, when I did, would it be a sealed highway by then.

Successive governments have made efforts to upgrade the road from Lakeland to Weipa, which in 2014 still had 380 kms of dirt road, impassable after rain.

The Federal and State governments co-funded work to seal sections of road between Lakeland and Weipa, on the Cape’s west coast. Weipa is the site of a major mining operation and a deep water port. So there are commercial imperatives involved with sealing that road.

The numbers of tourists visiting the region fluctuate according to economic conditions and extreme weather events. Studies have concluded that the majority of Cape York adventurers are self-contained, so their contribution to the local economy is negligible.

As the Federal Government’s Wild Rivers report observed, Cape York is large and underdeveloped and only accessible for eight or nine months of the year. The region comprises 15% of Queensland in area, but accounts for only 0.3% of the State’s population. Cape York’s residents are amongst the most disadvantaged in Queensland. More than half (54%) of Cape York people aged 15 years and over have a gross weekly income of less than $400 per week.

While sealing Cape York’s main road and also minor roads to Aboriginal communities might be a good thing for locals (less wear and tear on their vehicles and all-weather access), one ought not to make the trek too easy. Cape York has been nominated as a UNESCO World Heritage site (near neighbours, the Great Barrier Reef and the Queensland Wet Tropics, are already listed). But as the University of Melbourne’s Jo Caust recently wrote in The Conversation, some World Heritage listed sites are being loved to death and authorities need to exert some control over visitor numbers.

When you read about the impact of mass tourism on Cambodia’s Angkor Wat and Vietnam’s Hoi An, a coastal town that escaped the ravages of war, perhaps it’s a good thing that mass tourism is unlikely in Queensland’s rugged and remote top end.

Really pleased that you didn’t bust. Apart from the fact that i like you both, tapestry has been down to single figures, including Kim.