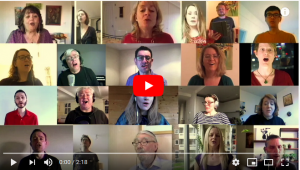 One evening in April, a Kiwi songwriter friend living in London posted a YouTube video by the London Humanist Choir, performing a love song in Māori. The video of New Zealand’s unofficial anthem, Pokarekare Ana, was, as we are now accustomed, a multi-screen video with choir members recording their parts remotely. I shared this with a few Kiwi friends who live elsewhere, knowing it would tug at the tendrils of homesickness, which are almost always waving in the breeze.

This video has had some 37,000 views – not bad for an arts group with 322 subscribers. The group’s social media curator coined the cute phrase, ‘Choir-antine’.

The group’s leader, Alex Jaye, started by giving the choir singers notes on how to record, mostly to minimise unwanted noise, distortion and filtering. Once he received the 20+ videos, he used EQ and compression to correct problems detected in the audio (often due to mobile phone microphones).

“Very little corrective editing (on individual videos) was used as it kills the sense of there being a choir – which does invite blemishes naturally as part of the sound.

“Overall it was around a day’s worth of work, however mostly due to video editing not being my forte, so I would say all told five to six hours’ worth of editing.”

In the same vein, a virtual video by Camden Voices does Cindi Lauper’s True Colours a lot of justice.

Like Alex Jaye, the UK choir’s director Ed Blunt started by giving singers instructions for filming the videos to a click track (metronome).

“It was a steep technological learning curve for me as I only had limited experience with video editing.”

He also converted the individual video formats into a uniform file type. The video was synchronised separately from the audio and the different grids were arranged and then exported (one at a time) to an editing programme (Premiere Pro). The audio tracks were synced and mixed in Logic.

My point, before we get too much further into this topic, is the value of such contributions to the community in general. True Colours (this version) has had 1.64 million views. If even 10% of the people who watched this sent Camden Voices $1, they would be able to top up their larder, probably bare these past months from a lack of paid performances.

“The audio part is the challenging part for me. I have to put 25 voices in line with each other and check that they are all correct. That takes quite a lot of time. The visual is very easy. I just do two runs through Zoom and then stitch that together over the top of the audio that I’ve done previously.”

Musicians, performing artists, actors and dancers were quick to adapt the technology to the life of isolation. Anyone with a smart phone and the ability to film themselves could play. The production values on numerous videos by orchestras, jazz bands, country musicians and choirs have, for the most part, been outstanding.

The ‘Quarantunes’ series by the Nelson family (Willie and sons Lukas and Micah) is worth a look. Lukas, who wrote a lot of the music for the hit movie A Star is Born, is the one singing, in case you were wondering!

Turn off the TV and build a Garden:

Queensland Ballet is a local example of an arts company creating ‘mini-ballets’ to keep subscribers’ appetites whetted for next year’s season. On May 21, QB made the difficult announcement that it was postponing its 2020 season to 2021.

Queensland Ballet Artistic Director Li Cunxin AO said the company was planning a reintroduction of activity “in a cautious and methodical manner to optimize dancer and community safety”.

Mr Li said in a statement that the decision was also based on feedback from patrons that they may wish to wait until 2021 to enjoy ballet again.

“We have also undertaken economic modelling which has considered potential social distancing restrictions that would render any return to the stage as extremely costly and potentially detrimental financially to the company.”

If you are a ballet fan (and FOMM’s research suggests that readers are more likely to follow the arts than the NRL), you can donate money this month and a benefactor will quadruple your gift. So your humble $25 turns into $100 and so on. To keep the faith, QB is posting 60 short dance videos through the month of June.

Britain’s National Theatre has been filming live performances and streaming them every Thursday. The most recent play is Shakespeare’s Coriolanus, starring Tom Hiddleston. There was also a performance of Frankenstein starred Benedict Cumberbatch as the monster. Imagine!

This is high art delivered with a generosity of spirit while the theatre is closed to patrons until at least August 31. If you think about what tickets to live theatre cost in Australia, you could log on to PayPal and send them a few quid!

I rather liked comedian Sammy J’s Antique Roadshow piss-take recently where he evaluated the worth of a pair of tickets to a live event. As the faux antique owner says, “you mean people used to leave their houses?”

We might bear this satire in mind, given that this week the first patrons will be allowed into live rugby league games. The National Rugby League apparently pointed out that pubs and clubs were allowed to have up to 50 patrons on their premises (subject to social distancing rules). So, the NRL said, it was only fair that rugby league fans to be allowed in limited numbers, confined to the catering sections of stadiums.

It will be interesting to see if Fox Sports abandons its naff ‘virtual crowd’ audio, the sports equivalent of canned laughter in a comedy show where there is no audience.

Andrew Moore of the ABC’s sports show Grandstand left no room for ambiguity when he commented on this during a lull in play.

“When two players are down injured like this (a head clash known as ‘friendly fire’), the crowd would normally go quiet. Let’s have a listen (pushes window open). Nah, nothing! No fake crowd noise on the ABC, folks.”

Which is as good a point as any to observe that while arts communities were getting creative through the March/April covid-19 restrictions, the best Channel Nine (the home of rugby league) could come up with was re-runs of State of Origin matches from bygone eras. the transition over the next 12 months.

The best advice to choirs and singers in general is dire – there is no safe way to practice public singing while the coronavirus is active.

Dr Lucinda Halstead, one of the experts quoted in this paper, says physical distancing on a stage for a choir would not be possible:

“You would need a football stadium to space apart the Westminster choir”.

The reality is that normal transmission will not be resumed until social distancing ends (as is now the case in New Zealand).